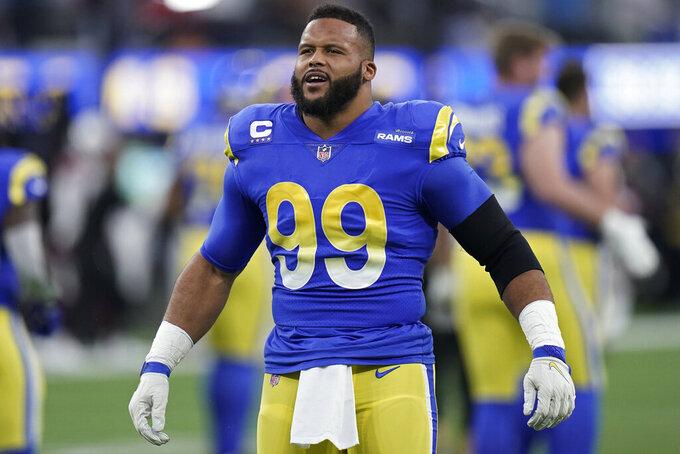 LOS ANGELES (AP) — All-Pro defensive tackle Aaron Donald is getting a big raise to stay with the Los Angeles Rams under a reworked contract through 2024.

The Super Bowl champion Rams announced Donald's return Monday. The team didn't disclose terms of the new deal, but the NFL Network reported Donald is getting a $40 million raise that will make him the highest-paid defensive player in the league.

Donald was already under contract for $55 million over the next three seasons, but he openly contemplated retirement after he won his first ring in February. The Rams realized Donald deserved a hefty raise, and he will get $65 million guaranteed in the next two seasons.

The deal means the seven-time All-Pro will be back to torment offenses at the heart of the defense with the Rams, who will be among the Super Bowl favorites again in the upcoming season. Los Angeles already signed quarterback Matthew Stafford to a contract extension during the offseason, and the rest of the team's championship core is largely intact.

The 31-year-old Donald has stayed at home in Pittsburgh during the Rams' offseason workout programs, but he is expected to be in attendance when the team opens its mandatory minicamp Tuesday.

Donald is widely considered the most dominant defensive player in the sport, and he demonstrated his power yet again last season. He capped four excellent postseason games by making the final defensive play to stop the last drive by the Rams' opponents in both the NFC title game and the Super Bowl.

Donald finished the regular season with a career-high 84 tackles and 12 1/2 sacks, his fifth straight season in double digits.