Analysis: Popovich has to love play from Olympians in finals 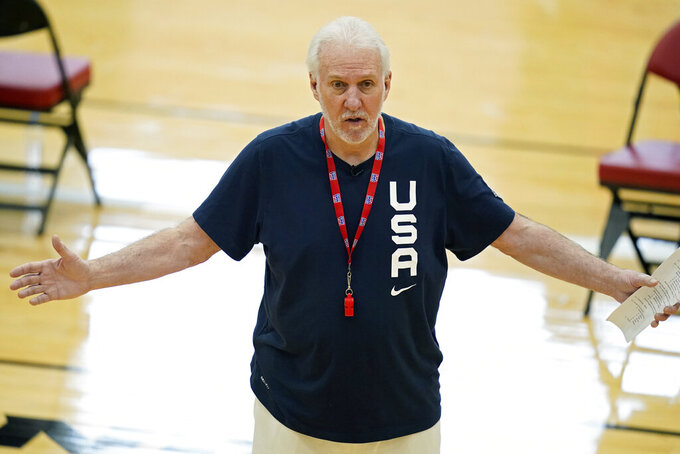 The happiest basketball coach in the world right now should be Milwaukee’s Mike Budenholzer, since he's one win away from the NBA title.

The second-happiest should be USA Basketball’s Gregg Popovich.

Consider what Jrue Holiday, Khris Middleton and Devin Booker did in Game 5 of the NBA Finals on Saturday night: They combined for 96 points, all getting between 27 and 40. They were in top form, which was great news for USA Basketball.

Game 6 of the finals is Tuesday in Milwaukee, when the Bucks can win their first title in 50 years. Game 7, if necessary, is Thursday in Phoenix. And when the series is over Holiday, Middleton and Booker will trade their green, white and orange uniforms for red, white and blue at the Tokyo Olympics. They all say they’re going to honor the commitment to play, even though the finals will have just ended and then a flight halfway around the world awaits.

The Americans have not exactly been a high-octane steamrolling machine in their Tokyo tune-ups so far, with a 1-2 record in three exhibitions in Las Vegas and now coming off some roster revamping following the virus-related withdrawal of Bradley Beal and an injury-related withdrawal by Kevin Love. Beal and Love are out, Keldon Johnson and JaVale McGee take their place.

It looks like the U.S. absolutely will need Holiday, Middleton and Booker if it’s going to get the job done in Tokyo. And there’s a very real chance that the Americans will have no more than one practice with their entire Olympic team together before they open their quest for a fourth consecutive gold medal next Sunday in Tokyo against France.

It was never going to be easy for the U.S.; having almost no time as a team together before things get real in Tokyo will only make it that much tougher.

“I have watched the games,” Popovich said a few days ago when asked if he’s watching the NBA Finals while on USA Basketball duty in Las Vegas. “I have to admit that I watch three guys more than I watched the teams. I just can’t help myself. I keep watching them, I keep hoping that they stay healthy. And then, we all think about what would be the best way to include them and blend them into the group. There’s no formula for that.”

He didn’t say which three guys. He didn’t have to. It’s obvious.

USA Basketball knew it was rolling the dice by choosing players that had a shot of going to the NBA Finals, but had no choice given the timeframe. They ended up with three and it could have been more; the Americans took a run at getting Phoenix’s Chris Paul to commit to Tokyo, but he ultimately decided not to play on the team.

The plane carrying the Olympic team — some of it, anyway — to Tokyo leaves Las Vegas on Monday morning. Middleton, Holiday and Booker won’t be on that flight; they’ll still be at their real jobs. They’re coming over separate from the rest of the team in the week.

Popovich can’t be thrilled about that part, of course. But he must have been downright giddy with how his finals Olympic trio did Saturday night, particularly at crunch time.

Middleton — who has picked the perfect time to play the series of his life — made a stepback 3 to put Milwaukee up eight with 2:23 remaining. Booker answered on the next possession to get the Suns within six, then a 3-pointer with 1:24 left to cut the lead to 120-117. And when Phoenix was within one, it was Holiday who stripped Booker and then found Giannis Antetokounmpo for an alley-oop dunk with 13.5 seconds remaining.

Popovich has deep ties with Budenholzer, deep ties with Phoenix coach Monty Williams as well. He’ll be thrilled for whichever coach wins this series, heartbroken for the one that loses. But it’s a safe bet that he might be pulling for the Bucks on Tuesday night to end this series — and therefore get the Olympians to the Olympics as quickly as possible.

“I think it’s going to be a little bit by the seat of the pants because there’s no formula to go by,” Popovich said. “It depends how the team is doing and the condition of the players here, what we think we need. Our first game is France so we’ll look in terms of what fits might work best, but it’s not going to be like they’re going to come and sit for a week and get ready. They’re going to have to come in and play.”

True, even a successful coach like Popovich isn't sure how this will work. But if Holiday, Middleton and Booker bring this form to Tokyo, the struggling Americans could be just fine.

Tim Reynolds is a national basketball writer for The Associated Press. Write to him at treynolds(at)ap.org