AP WAS THERE: 2004 Athens Olympics 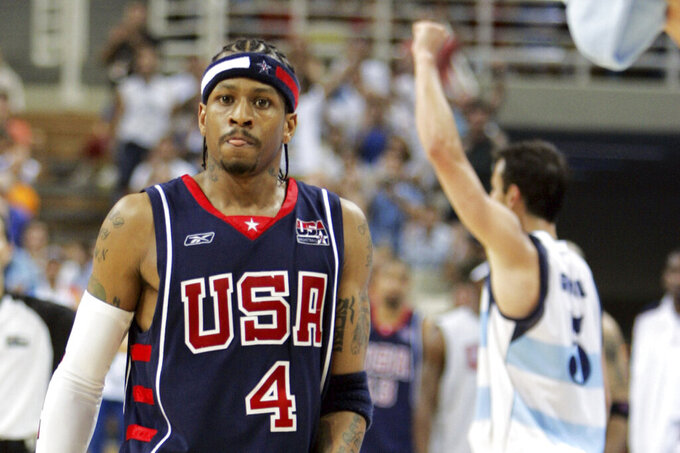 FILE - In this Aug. 27, 2004, file photo, USA's Allen Iverson (4) walks off the court as Argentina's Emanuel Ginobili celebrates at the end of their semifinal basketball game at the Olympic Indoor Hall during the 2004 Olympic Games in Athens, Greece. (AP Photo/Michael Conroy, File)

EDITORS — With the Tokyo Olympics postponed for a year because of the coronavirus pandemic, The Associated Press is looking back at the history of the Summer Games. This story was transmitted in 2004 from the Athens Olympics.

Bronze is the best the American men’s basketball team can do, and the reason is simple: They were beaten by a better team, Argentina.

Manu Ginobili scored 29 points to lead his nation to another victory over the country that used to dominate the sport, an 89-81 win in the Olympic semifinals Friday night.

Argentina, with almost the same roster that made history in 2002 by becoming the first team to defeat a U.S. squad of NBA players, will compete for the gold medal against the winner of Friday’s late game between Lithuania and Italy.

The Argentines were the better passers, shooters and defenders. They confronted the Americans with a mixture of man-to-man and zone defenses, and confounded them with an assortment of back picks that turned the start of the second half into a layup drill.

Argentina’s players celebrated wildly when the game ended, and the crowd yelled ``Ole!″ U.S. coach Larry Brown walked over and gave a handshake and hug to his Argentine counterpart, Ruben Magnano, who played for Argentina against the first Dream Team in Barcelona.

A dozen years later, Magnano’s team became the first to knock America out of gold medal contention since the Soviet Union did it in Seoul in 1988.

NBA commissioner David Stern attended the third loss of the Athens Games for the Americans, who entered the tournament with a 109-2 record in prior Olympics.

Their first loss to Puerto Rico was shocking for its decisiveness, and their second to Lithuania finally got the message across to the players on the young U.S. roster that the level of the competition was a whole lot better than they had imagined.

The U.S. team had been playing better since, and its best effort came Thursday in a victory over previously undefeated Spain.

But just a day later, they went back to missing 3-point shots, didn’t get a breakout performance from any of their NBA stars and couldn’t make a sustained comeback after they fell behind by a double-digit margin.

The first half ended with Argentina ahead 43-38 after its big men outplayed the Americans and showed themselves capable of playing with as much flair as anyone.

The half’s prettiest play came on the 3-on-1 break when Hugo Sconochini, one of the team’s elder statesmen, tossed a nifty behind-the-back pass to Alejandro Montecchia for a high-arching layup over Richard Jefferson that gave Argentina a 42-33 lead.

The Americans shot just 36 percent in the first half and didn’t hit their first 3-pointer — missing their first five — until LeBron James made one 30 seconds before halftime.

The third quarter began with Ginobili hitting a wide-open 3-pointer, Duncan picking up his third foul, Luis Scola, Ginobili and Fabricio Oberto getting inside for layups, and Marbury clanging a driving shot off the side of the backboard.

Suddenly, the Americans were down 53-40 and on the verge of having the game get away from them.

It soon did. Duncan was whistled for his fourth foul with 7:41 left in the third quarter, causing Brown to jump out of his chair and scream ``NO!″

The Americans quickly got their deficit down to six, but Montecchia and Ruben Wolkowyski knocked down 3s, and Ginobili added a rare four-point play — just like the one from Lithuania’s Sarunas Jasikevicius that doomed the Americans in their opening-round loss — to make it 70-57 entering the fourth quarter.

The Americans trailed 76-65 when Duncan fouled out with five minutes left for hitting Ginobili with a hip check. The U.S. team eventually went to a trap and a full-court press in an effort to climb back, but Argentina handled it with aplomb and didn’t let the Americans get closer than eight.