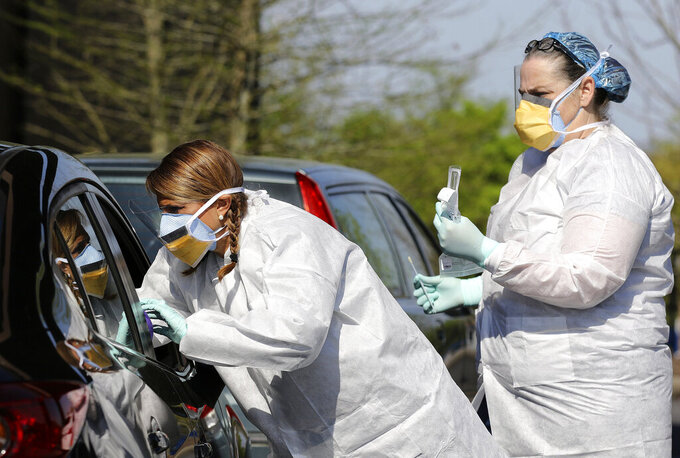 In this Wednesday, April 1, 2020 photo, nurse Mandy Stuckey reaches into a patient's vehicle window to do a COVID-19 test as fellow nurse Tonya Green, right, looks on at the drive-thru COVID-19 testing site at New Life Church in North Little Rock. The site, a partnership between Sniffle Health and Natural State Laboratories will be open daily from 10 a.m.- 4p.m. through April 11. (Thomas Metthe/The Arkansas Democrat-Gazette via AP)

LITTLE ROCK, Ark. (AP) — Arkansas’ governor on Thursday resisted issuing a broad stay-at-home order to curb the coronavirus outbreak, even as the state’s cases increased and a second lawmaker tested positive for the virus.

Health officials said the number of people with coronavirus had risen to at least 643, from 624 the night before. An additional two people died from COVID-19, the illness caused by coronavirus, bringing the total deaths to 12.

NO STAY AT HOME ORDER

Gov. Asa Hutchinson defended the state being one of a handful remaining that hasn't issued some form of a stay-at-home order

Arkansas has imposed other sweeping restrictions, including a ban on gatherings of more than 10 people and prohibiting sit-down service at bars and restaurants. The state has also closed gyms, barbershops and casinos. Similar restrictions had commonly been in place in states that have issued stay-at-home orders.

Hutchinson said a stay-at-home order would still allow hundreds of thousands to leave their homes if Arkansas included exemptions other states with such restrictions have granted. He cited employees at clothing stores that have stayed open or are providing online sales as ones who could be put out of work by a broader order.

“People are making their own decision to stay home, and that's exactly what they should be doing, unless there's an absolute necessity to get out," Hutchinson said. He said the state's restrictions have helped keep cases below where its health officials had projected at this point.

"While our efforts so far have made some difference and have been well-intentioned, it's clear that far too many people are disregarding guidance to stay home and avoid crowds,” state Rep. Denise Garner said.

Local governments have implemented other restrictions but have said only the state can impose a stay at home order. Little Rock and at least two other cities are enforcing nighttime curfews in response to the outbreak.

Flowers is the second lawmaker to test positive for the virus. Flowers said she was tested after developing a fever and body aches over the weekend.

The announcement comes a week after lawmakers met for a marathon special session to approve a $173 million coronavirus fund. The House met at a 5,600-seat basketball arena instead of the Capitol due to coronavirus concerns.

Hutchinson on Wednesday asked the federal government to close the park and imposed temporary restrictions on state parks, including prohibiting overnight use at them. Hutchinson, legislators and local officials have complained about large numbers of people crowding the Buffalo National River area.