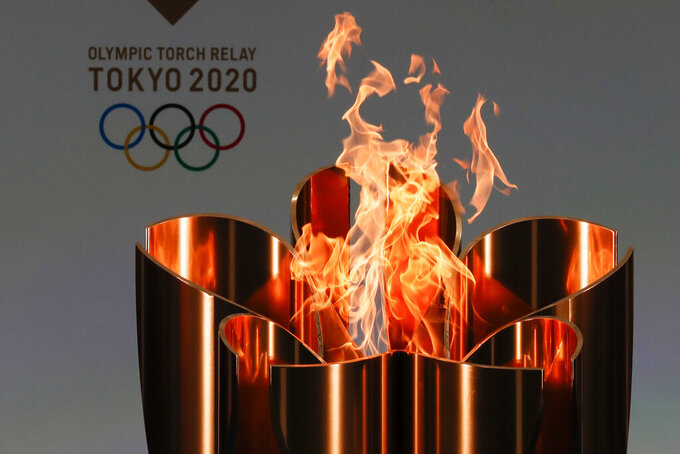 FILE - In this March 25, 2021, file photo, the celebration cauldron is seen lit on the first day of the Tokyo 2020 Olympic torch relay in Naraha, Fukushima prefecture, northeastern Japan. The Tokyo Olympics are not looking like much fun: Not for athletes. Not for fans. And not for the Japanese public, who are caught between concerns about the coronavirus at a time when few are vaccinated on one side and politicians and the International Olympic Committee who are pressing ahead on the other. (Kim Kyung-Hoon/Pool Photo via AP, File)

The Brazilian said he was ignored in 2016 when the torch relay took place at his home city and praised Japan for giving him the honor this time.

Zico, who is a club director at Kashima Antlers and a former Japan coach, carried the torch for about 200 meters in Kashima on Saturday.

Zico, who played for the Japanese team between 1991 and 1994, called it “an unforgettable day in my life.”

Kashima will host one of the semifinals of the men’s soccer Olympic tournament.

Zico, a former attacking midfielder, remains a hero to fans of Rio-based Flamengo, Brazil's most popular club, and was also part of the much admired Brazil team at the 1982 World Cup which was eliminated by Italy.

That was not enough for Rio organizers to invite him to carry the torch.

Zico has previously recalled the time he failed to make the Brazil squad for the 1972 Munich Olympics.

“I almost stopped playing soccer after I was left out,” he said.