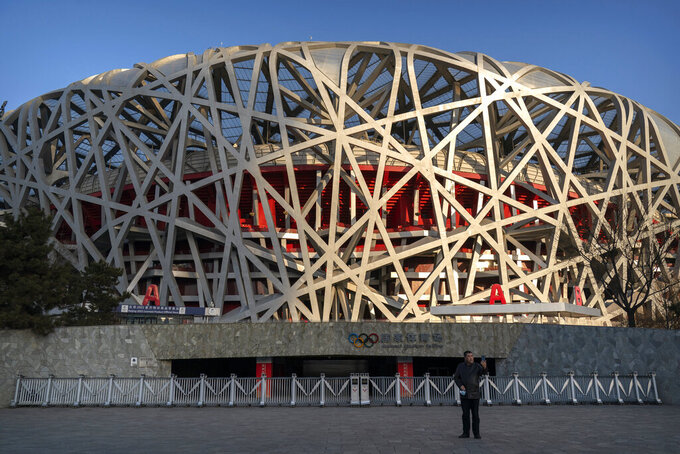 A man poses for a selfie near the Olympic logo at the National Stadium, also known as the Bird's Nest, in Beijing, Tuesday, Feb. 2, 2021. The venue will host the opening and closing ceremonies during the upcoming 2022 Beijing Winter Olympics. (AP Photo/Mark Schiefelbein)

GENEVA (AP) — The Court of Arbitration for Sport has been criticized for picking judges to work at the Tokyo Olympics who were not expert enough to handle doping cases.

Days before the highest court in sports opens its special Olympic tribunals at the Winter Games in Beijing, it was singled out in a wide-ranging report published by the World Anti-Doping Agency that broadly praised operations at last year's Tokyo Olympics.

Some CAS judges in Tokyo had an “insufficient level of anti-doping knowledge” relating to rules and previous cases, independent observers appointed by WADA said Friday.

“Some questions asked by panel members in at least one of the hearings highlighted this,” the observer team said.

The 44-page report did not identify which members of the CAS anti-doping division in Tokyo — a president, co-president and six arbitrators — were thought to lack expert knowledge for the handful of cases they dealt with.

The Lausanne, Switzerland-based court countered that the panel which made the criticisms — eight professionals from different sectors of anti-doping work — “are not familiar with CAS procedures” and made “subjective assessments.”

Of the six arbitrators at the Tokyo Games, only one is returning among the four selected by CAS for anti-doping cases in Beijing. The court published the list in a statement this week.

That turnover was announced before the advice published by the WADA observers that at future Olympics the CAS anti-doping division "is comprised of members more familiar with the World Anti-Doping Code and anti-doping regulations or that the members have access to anti-doping training or education materials prior to the Games.”

A new member of the CAS team in Beijing will be Australian lawyer John Boultbee, a former secretary general of rowing’s governing body who now chairs that organization's anti-doping tribunal.

The “insufficient knowledge” in Tokyo was said to be “specifically their understanding of some provisions of the Code, the International Standard for Results Management, as well as CAS jurisprudence on strict liability, burden of proof, and responsibility of that burden,” the WADA-appointed team said.

The observers did not suggest any athlete in Tokyo was judged unfairly but they did object to not being notified about two hearings where a provisional suspension was to be imposed.

“It is important that an (observer) participates in hearings to ensure that the parties’ procedural rights are maintained,” the WADA-appointed panel said.

The long-time director general at CAS, Matthieu Reeb, said the court would investigate the panel's view on judges' expertise, though noted it “has at no point been raised with CAS directly.”

Reeb further defended the court in a statement to The Associated Press, saying "it can be already emphasized that none of the (doping case decisions) rendered in Tokyo have been challenged by WADA or by any party.”