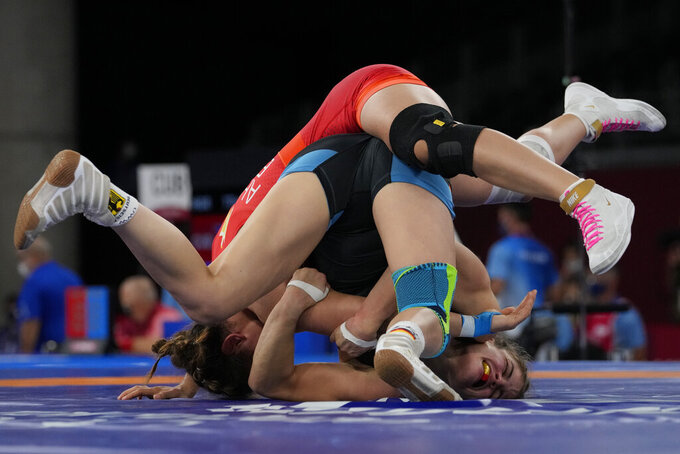 FILE - In this Aug. 2, 2021, file photo, Germany's Anna Carmen Schell, right, compete against Egypt's Enas Ahmed during their women's 68kg freestyle wrestling match at the 2020 Summer Olympics in Chiba, Japan. Tokyo Olympians are exercising extraordinary discipline against the coronavirus. They are sealed off in a sanitary bubble that has made competition possible but is also squeezing a lot of fun from their Olympic experience. (AP Photo/Aaron Favila, File)

TOKYO (AP) — Holding each other tighter than lovers, the wrestlers smear each other with sweat, spittle and — when they inadvertently cut each other — sometimes blood. Lungs heaving, mouths agape, they huff and puff into each others' flushed faces. On their glistening bodies, it's impossible to tell their opponents' fluids and theirs apart.

Underscoring the health risks of such proximity: They are the only people in the cavernous hall not wearing face masks.

Watching Olympic wrestling in the midst of the pandemic of a deadly airborne disease feels like being part of a virological experiment, a real-life study of droplets, aerosols and fluid dispersion.

A germophobe's nightmare, it's a messy spectacle best observed from the stands where volunteers hold signs reading "keep physical distance” for non-existent crowds, barred from the Tokyo Games because of surging coronavirus infections in the Olympic host country where less than one-third of the population is vaccinated.

But because wrestling is the most close-contact sport of the Olympics, it also speaks loudest of the all-out war against the virus that athletes have waged to get to Tokyo and, once here, continue to fight to stay free of infection and compete.

Wrestlers are the Games' equivalent of the canaries that alerted coal miners to noxious gases in the air of closed-in mines. That even they say they feel safe going body to body in combat testifies to extraordinary efforts that Olympians are making to stay healthy, exercising a sanitary discipline that has made competition possible but has also squeezed a lot of fun from their Olympic experience.

Which Brazilian wrestler Aline Silva says is a necessary price to pay. She hopes the Tokyo Games will serve as a counterweight to COVID-19 fatigue by sending a sobering message that until the virus is beaten, people everywhere should exercise greater caution and take better care of themselves and others. Brazil has the world’s second-highest COVID-19 death toll with 556,000 fatalities.

“In Brazil, everybody knows that it is best to not be in parties and do things like that. But I don’t know why they don’t care, they do anyway," Silva said. "So we need to show people that we need, right now, to be focused on doing our jobs as safely as possible.”

The 34-year-old had set her sights in Tokyo on making amends for her failure to win a medal at her home Games in Rio de Janeiro in 2016. But when the pandemic struck, she decided to put wrestling on hold indefinitely, in part because it no longer felt safe but also to set an example that life couldn't, shouldn't, simply carry on as before. She has an uncle who spent 13 days in the hospital with COVID-19. Only this year, in a small bubble of athletes who were tested and lived together with limited outside contact, did she resume preparations for the Games.

“I believe that, right now, people should be thinking about lives. That matters more than any sport. But we are here, trying to beat this virus, too,” she said. "We need to do our part for everybody to survive. I might not die of COVID but I don’t want to pass the disease on to somebody that might die. A lot of people, I think, don’t think about that.”

In Tokyo, Olympians can't not think about that. They are sealed off in a giant sanitary bubble built with daily tests, oceans of sanitizer and strict restrictions on their movements. They are instructed not to mix with people outside their teams. They are told to avoid hugs, high-fives and handshakes — all deemed “unnecessary” by Games organizers — advice they often ignore in the heat and joy of competition. They cannot watch sports other than their own or wander around the city.

The dining hall in the athletes' village where most of them are confined has hospital-like cleanliness. Matilda Kearns, a water polo competitor from Australia, detailed the sanitary procedures in a TikTok posting. They not only sanitize their hands but also wear plastic gloves before touching food trays that have also been sanitized, she said.

They then eat in small cubicles, which they wipe down with disinfectant wipes, separated by see-through plastic screens that make meal-time chat “pretty difficult because it's hard to hear through them,” Kearns said. She added that they also have an additional team rule “that once the mask is off, you only have 10 minutes to eat to reduce exposure.”

Table tennis has barred players from blowing on the ball before they serve, which some used to do to rid it of dust, and from wiping sweaty palms on the table. Before the pandemic, players were only allowed to wipe themselves down with towels after every six points, to avoid slowing play. Now, they can use towels liberally, to avoid sweat on the table. Players also must wear masks and gloves when selecting their stock of balls before matches.

In badminton, when players need to replace a damaged shuttlecock, they now get a new one themselves from a dispenser, so they are no longer handled by the match official who used to distribute them.

At the Olympic boxing arena, uniformed cleaners attack the ring between most fights to wipe down the ropes, corner pads and canvas of any sweat or blood, before the next pair of boxers forces them to do it all over again. In weightlifting, the bar is disinfected with surgical alcohol between lifts.

Outside the Olympic bubble, fueled by the more contagious delta variant, infections in Tokyo have logged new daily records and nearly tripled in the first week after the Games opened on July 23. Japanese officials say the surge is unrelated to the Olympics.

Inside the Olympians’ bubble, infections have been limited. Since July 1, 222,000 tests on athletes and team officials yielded 32 positives, a strike rate of 0.01%, Games organizers say.

Fully vaccinated and as careful as he can be, Finnish wrestler Elias Kuosmanen said he felt safe enough to shut off his mind to the risk of infection when he competed and got all sweaty in the men's Greco-Roman heavyweight class.

“We’re tested all the time, so I am pretty sure that the opponents and everyone are COVID-19-free," he said. “I don’t need to stress about it.”