Column: Olympic format of stroke play is dull, but it works 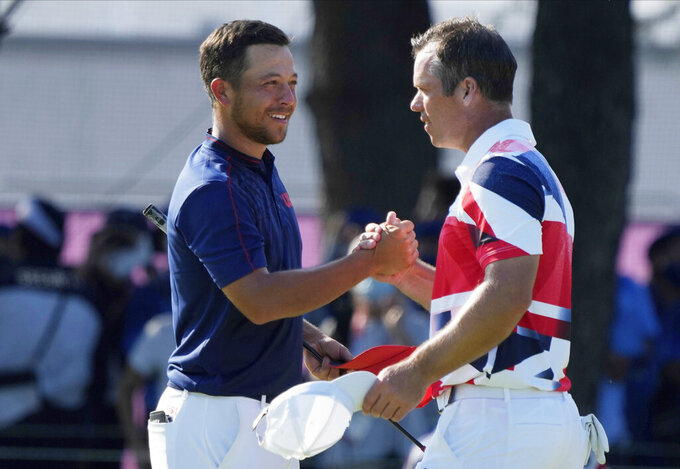 CORRECTS LAST NAME TO SCHAUFFELE FROM SHAUFFELE - Xander Schauffele of the United States, left, is congratulated by Paul Casey of Britain after winning gold in the men's golf event at the 2020 Summer Olympics on Sunday, Aug. 1, 2021, in Kawagoe, Japan. (AP Photo/Andy Wong) 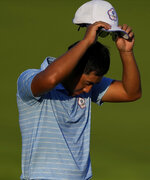 KAWAGOE, Japan (AP) — Everyone seemed to have a solution for how to fix golf in the Olympics, right up to the point seven players from seven countries went into a seven-way playoff for a bronze medal.

Never has golf been so compelling after it had a winner.

“I never tried so hard in my life to finish third,” Rory McIlroy said.

He tied for fourth and can't wait for Paris in three years.

His words captured the emotions of those who were at Kasumigaseki, even if they weren't in the playoff. A sport older than the Olympics is still new to the program, but in its second time back after a century-long absence, golf is starting to catch on.

The loudest complaint is that it looks the same as the Valero Texas Open and the Rocket Mortgage Classic, the Meijer LPGA Classic and the Pure Silk Championship.

This was compelling long before a playoff that took four holes to eliminate six players, before Xander Schauffele had his Olympic moment with an up-and-down from 98 yards, even before Slovakia's greatest player, Rory Sabbatini, had two bogeys and still shot 61 to win the silver.

Five players were tied for the lead at one point on Saturday.

Eight players were separated by four shots at the start of Sunday.

And the best player at Kasumigaseki — not the “champion golfer of the year” but the Olympic champion for the next three — won the gold medal.

Missing was the team element, at least until the anthem played and the flags were raised.

Finding something special can sometimes cross the line into a gimmick.

“The Games isn't a place where you experiment,” said Antony Scanlon, the executive director of the International Golf Federation who has a deep background in the Olympics.

The team component would seem to be the most obvious solution without making it overly complicated. The World Cup used to crown the individual champion and then combine the scores of two players to decide the team title.

If that had been in play, Britain would have gone into the final round at 22-under par, one shot ahead of Ireland and Mexico, with Chile three shots back. The best two Americans also would have been one shot behind, except the U.S. team likely would have been its two highest-ranked players, not the best two scores.

That's what the IGF is considering, but not until Los Angeles in 2028.

“The players have said, ‘We want a team event.’ So do we,” Scanlon said. “We were looking at a team event for Paris (in 2024), but there also was a lot of pressure from other federations to add to their events.”

He said the International Olympic Committee wants to stabilize the program for Paris.

One big hurdle is the IOC has never embraced the idea of two events wrapped into one competition. Golf's mission is to get past that.

The glaring omission is a mixed team event, which the Tokyo Olympics delivered in swimming and track relays.

The women and men played at the same venue for the same prize (money, not medals) the week of the Olympics in Northern Ireland in an official tournament sanctioned by the European Tour, the LPGA and the Ladies European Tour. The predecessor was the Vic Open in Australia.

The PGA Tour was working toward a mixed team event for the World Cup until the COVID-19 pandemic arrived and progress slowed to a stop.

The Olympics would be ideal, if not for the schedule.

“We'd love to do it," Scanlon said. “It's finding time in the schedule. When you've got 16 days in the Olympics to fit in three competitions without compromising the individual events, then it gets hard.”

Participation on the men's size would appear to be gaining momentum. The real measure will be Paris, assuming a virus — Zika or corona — doesn't get in the way.

Golf is an awkward fit in the Olympics by its very nature. There is no clear favorite for a gold, no big upset if someone doesn't medal, as is the case in so many other sports. The sport moves at glacier pace for three days, and then can spin wildly out of control over the final hour.

That's not always the case, of course.

Inbee Park won the gold medal by five shots in Rio de Janeiro. That still was compelling because the seven-time major champion overcame injury and two months without serious competition to take down the world's No. 1 player.

That can happen at any tournament, no matter the format.

This looked like a normal tournament. For the most part, it felt like one. But it was the Olympics, and it was a rare moment to hear players agree on one thing.

They can't wait for the next one.