Column: Some of the best Olympic stories are at the back 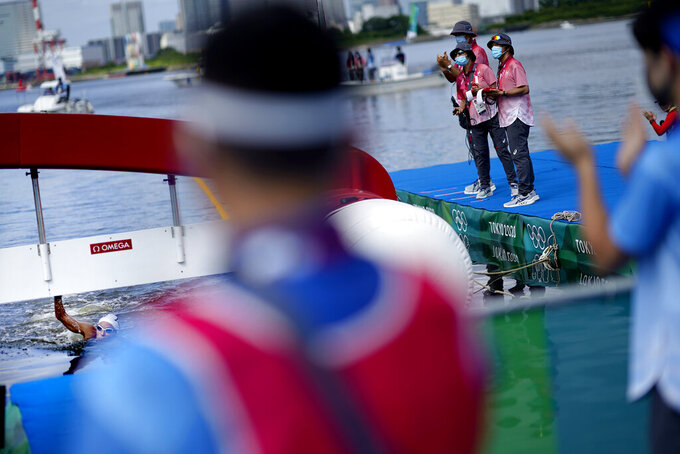 TOKYO (AP) — As the world’s greatest open water swimmers jostled for the lead, their eyes on an Olympic gold, my eyes kept drifting to the tiny figure falling further and further behind everyone else at Tokyo Bay.

Much of the attention at any Summer Games is focused on who finishes first, second and third.

But the stories that really make it special are often found at the back of the pack.

The 32-year-old Algerian, who lives in Portugal and has a degree in chemical engineering, knew before she dived in the water that she had no chance of winning Wednesday's 10-kilometer race.

She simply wanted to finish.

Cherouati managed to stay close to the tightly bunched pack on the opening lap, but she quickly surmised the pace was much faster than she could handle. The other 24 swimmers included Olympic medalists and world champions. She had to let them go.

“I know that my level is not the same as them,” Cherouati said. "I just want to manage to my level. Sure, I try to swim with the best. But when I see the rhythm is too high for me, I wanted to swim on my rhythm."

So began that loneliest of pursuits: a marathon with no one else around, other than a lifeguard on a paddle board who was assigned to keep an eye on her.

“Swimming alone is hard. Trying to see where the others are is hard," Cherouati said. “It's easier to swim with someone else. You have a better rhythm. I was swimming alone, so it's hard mentally — and physically, too. But I didn't give up.”

On each of the seven trips around the rectangular layout, the Tokyo skyscrapers and towering Rainbow Bridge providing a spectacular backdrop, the margin from Cherouati to everyone else grew and grew.

Before long, most of the other swimmers were on one side, she was on the other. It seemed a real possibility that she might get lapped, which at least would have provided some company.

But her arms kept churning, her legs kept kicking — all of it a seemingly futile exercise in self-inflicted torture that only she could understand.

Every part of Cherouati's body was searing with pain as she churned through the choppy waters, counting down the laps on an increasingly sweltering morning.

Six to go. Five to go. Four to go. Three to go. Two to go. Finally, that beautiful bell, ringing in her ear to signal just one lap remained.

Each stroke was pure agony.

But Cherouati knew one thing would hurt even more.

“For me, giving up is the worst that can happen to me,” she said.

It never crossed her mind?

Cherouati only took up open water — or marathon swimming, as it's officially known — four years ago. Until then, she had been focused on her studies, her only competitive swimming coming in a pool.

But something about this most maniacal of sports drew her in. Cherouati couldn't resist the challenge of swimming mind-numbing distances (some races are as long as 25 kilometers, or 15 1/2 miles) in rivers, lakes and oceans, where the threat of aquatic wildlife and ever-changing weather conditions only adds to the physical and mental toll.

The Olympic race began at 6:30 in the morning in an effort to mitigate the brutal Tokyo heat. It helped some, but it was still in the mid-80s Fahrenheit (about 29 degrees Celsius) with stifling humidity and water heated up to roughly the temperature of a nice, soothing bath.

That may be good for soaking, but it's hardly ideal for distance swimming. Cherouati had never competed in waters this warm.

“A very tough race for me,” she said. “The conditions were very hard. The water was very hot. The humidity was very high."

For good measure, the bronze medalist got hit by a large fish leaping out of the water, so that was another thing to keep an eye on.

The easy way out was stopping. Just stop. Others have done it in this grueling event. There's no shame in admitting that the sport got the best of you on this day, especially since Cherouati has been battling a sore left shoulder.

But she steeled herself to get to the end, no matter how long it took.

The others swimmers had long since climbed from the water by the time she caught a glimpse of the finishing pad above the water. As she crossed the line, she reached up with her right hand to slap the pad and make sure her time was recorded.

A handful of workers still lingering on the finishing dock applauded and bowed in appreciation.

Cherouati had matched them all in one respect.

She had finished, too.

Later, after changing from her skintight suit into much more comfortable attire — a green T-shirt and shorts — Cherouati chatted amiably about the experience for almost 10 minutes.

She was clearly proud of the tenaciousness and grit she had shown.

She had dug deep, real deep, maybe down to a level that even she didn't know she had.

She wants to give it another shot at the 2024 Paris Olympics.

“This is my first big step,” Cherouati said. “I did what I came to do. I finished the race.”

She didn't capture an Olympic gold.

But she was a winner in every sense.