COLUMN: Will sports ever stop cozying up to strongmen? 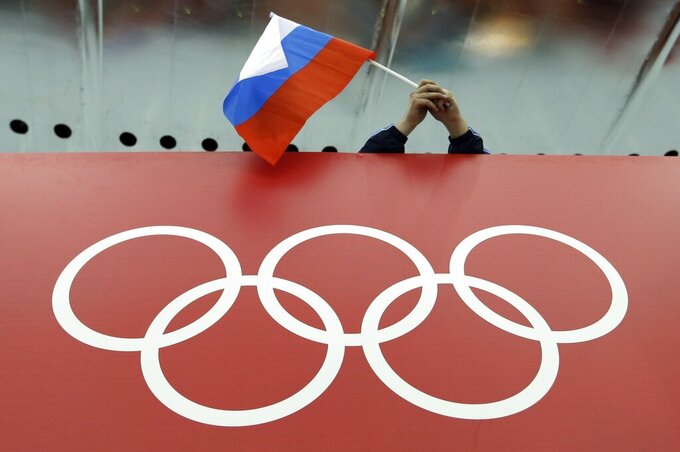 FILE - A Russian flag is held above the Olympic Rings at Adler Arena Skating Center during the Winter Olympics in Sochi, Russia on Feb. 18, 2014. The International Olympic Committee has made a sweeping move to isolate and condemn Russia over the country’s invasion of Ukraine. (AP Photo/David J. Phillip, File)

Strongmen and sports have always been a match made in hell, but that never bothered the august members of the International Olympic Committee before. Besides, who could have predicted that Russia and China would use the Games as a pretext to crack down on dissent or invade a neighboring country?

Everyone, except the unwitting dupes at the IOC (and FIFA, for that matter, but more on that in a moment).

Never mind that history is littered with examples of tyrants using such spectacles to signal their grand ambitions or, at the other extreme, pretend to be full-throated supporters of a rules-based society. Apparently, IOC members skipped those unhappy chapters. So imagine their disappointment to learn that Russia actually went ahead with its invasion of Ukraine just days after the closing ceremonies in Beijing. Even Germany waited three years after the 1936 Berlin Games had ended to launch war on Europe.

Better late than never -- at least it beat Switzerland to the punch -- the IOC finally struck back. On Monday, it called on sports federations and organizers worldwide to “not invite or allow” athletes and officials from Russia and its ally, Belarus, to take part in international competitions. According to the same statement, the committee’s executive board made the decision “with a heavy heart,” as if all the previous times the Russians were caught cheating at the Olympics and let off with a slap on the wrist wasn’t sad enough.

By now, the list of sports banning Russian athletes has swelled past a dozen and reads like an Olympic roster, which is both unsurprising and a scathing indictment of the IOC’s willingness to award the Games to any nation that showed up with a fat checkbook, no matter how ill-gotten the gains. It's the same approach employed by FIFA, soccer's international governing body, and IOC's only real rival in cozying up up to autocrats.

But there’s no looking the other way now. Yet to be determined, however, is whether this is the end of “sportswashing,” or just a temporary pause. We’ll know more in November, when the World Cup begins in Qatar, an oil-rich emirate with zero soccer tradition and, according to Freedom House, a population largely without political rights, few civil liberties and limited economic access. It should be loads of fun.

For all that, the practice of sportswashing -- staging or sponsoring sporting events to divert attention from sins ranging from the denial of basic human rights to targeted killings – had up until recently managed to stay out the headlines.

Phil Mickelson grabbed a few last month when he announced he was considering defecting from the PGA Tour to join a rival tour being organized by former golfer Greg Norman and backed by Saudi Arabia’s sovereign wealth fund. And Lefty got a lot more headlines than he ever bargained for just two weeks later, when it was revealed he knew exactly who he was doing business with.

“We know they killed (Washington Post reporter and U.S. resident Jamal) Khashoggi and have a horrible record on human rights,” Mickelson said in an interview last fall with journalist Alan Shipnuck for a forthcoming unauthorized biography.

“They execute people over there for being gay,” he continued. “Knowing all of this, why would I even consider it?”

That was not a trick question.

The answer is money, boatloads of money, the same enticement despots use to get their hooks into the morally bankrupt souls in the increasingly interconnected worlds of business, sports and entertainment. The harm that corruption causes is hard to get your head around when it’s something as terrifying as the invasion of Ukraine by Russia. Easier to grasp is the solitary image of 15-year-old Russian figure skater Kamila Valieva sobbing uncontrollably at the end of her Olympic program, an involuntary puppet in a drama where men and women with unconscionably dirty hands pull the strings.

Strongmen have always been obsessed with sports because unlike all the other crooked endeavors they’re involved in, the myth of a level playing field endures.

“Our country has always adhered to the principle that sport is beyond politics,” Russian Deputy Prime Minister Dmitry Chernyshenko said when the ban was announced, “but we are constantly drawn into the politics, because they understand the importance of sport in the lives of our Russian people.”

If they only knew.