EXPLAINER: How COVID tests, isolation will work at Olympics 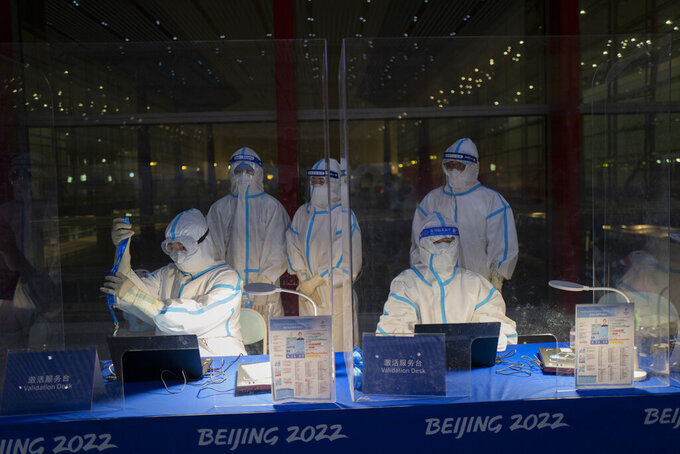 FILE - Olympic workers in hazmat suits work at a credential validation desk at the Beijing Capital International Airport ahead of the 2022 Winter Olympics in Beijing, Monday, Jan. 24, 2022. Athletes and others headed to the Olympics face a multitude of COVID-19 testing hurdles as organizers seek to catch any infections early and keep the virus at bay. (AP Photo/Jae C. Hong, File)

NEW YORK (AP) — Athletes and others headed to the Olympics face a multitude of COVID-19 testing hurdles as organizers seek to catch any infections early and keep the virus at bay.

A positive test could mean athletes sitting out the Beijing Games — perhaps even if they’re no longer contagious. Olympic officials say they’ll be flexible and review the need for isolation on a case-by-case basis.

It’s part of the complexities of staging a big event in the pandemic, because organizers want to ensure they don’t fuel outbreaks among participants or the local population. Since early in the pandemic, China has taken a “zero tolerance” approach to the virus.

Similar protocols to create virus-free “bubbles” were part of the Tokyo Games last summer and the end of the 2020 NBA season.

Here's how testing will work at the Winter Olympics:

All athletes, team officials, staff and journalists need to provide two recent negative tests before heading to China. They will be tested again at the airport before heading to their Olympic sites. During the Games, everyone will get daily throat swabs for PCR lab tests, with results coming back within a day.

And most everyone will already be vaccinated, because those who aren't have to quarantine for three weeks.

WHAT IF SOMEONE TESTS POSITIVE?

First, there will be a confirmatory test. Anyone who has COVID-19 with symptoms will go to a hospital. Those without symptoms go to a dedicated hotel for isolation. In both cases, they'll be unable to compete until cleared for discharge.

HOW LONG WILL ISOLATION LAST?

It depends. To get out of isolation, people generally need consecutive days of negative tests and no symptoms. They will be tested with PCR lab tests that can detect tiny amounts of virus. That means a test can come back positive long after a person is likely to spread the virus. The uncertainty over how long isolation might last is fueling worries. Last week, NBC said its announcers and many hosts would cover the Games from the U.S.

ARE TESTS THE ONLY FACTOR?

Organizers in Beijing say they’ll look at other factors in addition to testing when evaluating whether someone can leave isolation.

“What’s the person’s past history? Have they had confirmed COVID in the past? Have they been vaccinated fully?” said Dr. Brian McCloskey, chair of the medical expert panel for the Beijing Olympics.

PCR tests work by copying the genetic material in a specimen to detect a virus. If a lab needs to run a lot of amplification cycles to pick up the virus, it could mean a person has low levels and isn’t likely to spread it.

This week, organizers said they would take a less stringent approach on isolation for those with low levels of the virus. They eased the testing threshold that requires isolation but said people with detectable levels of the virus still need to take extra precautions, such as limiting contact with others and taking two tests a day, instead of one.

As scientists have learned more about COVID-19 and how it spreads, health officials in a number of countries have revised isolation requirements. In the U.S., for example, people can end isolation after five days if they don’t have any symptoms — without testing to see if they’re negative. But they're advised to avoid travel and others at high risk.

ARE MANY INFECTIONS EXPECTED?

Positive cases are expected to pop up, with the highly contagious omicron variant fueling infections in many parts of the world.

So far, organizers say there have been 39 positive results out of the more than 2,500 tests at the airport among those who arrived since early January. Within the bubble, there have been 33 positives out of 336,400 tests. None of the positives involved athletes. The average time spent in isolation for most has been around six days.