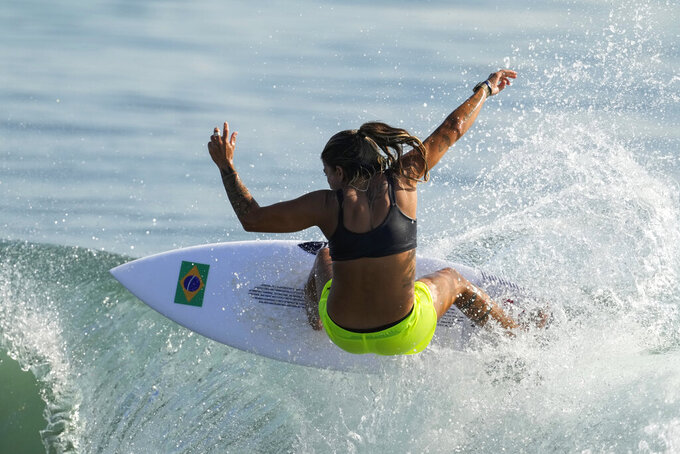 TOKYO (AP) — The Tokyo Olympics are introducing four new sports — skateboarding, surfing, karate and sport climbing. Each traveled its own unique path to the Games. Here, at a glance, from Associated Press journalists covering each sport, are the tales of how these sports reached Tokyo and what to watch for in each.

WHY IT’S IN THE OLYMPICS NOW: Because it’s coming home for its Olympic debut. The martial art that spread across Japan in the early 20th century and soon became ubiquitous worldwide has been a candidate for Olympic inclusion since the 1970s, but organizers never found its case compelling until the Tokyo Games presented an opportunity to showcase its blend of striking combat and rigorous discipline from its homeland.

WHAT TO LOOK FOR: The three days of competition at the famed Nippon Budokan will feature dozens of talented kumite (sparring) competitors in three weight divisions, along with the fascinating precision of kata (forms demonstration, often compared to a floor exercise in gymnastics). With karate currently on another upswing due to its resurgent popularity in movies and television, viewers are hoping to see excitement in a sport that isn’t always as violent as casual sports fans probably believe.

STARS TO WATCH: Japan’s greatest fighters will be under pressure to deliver. Naoto Sago’s competition against France’s Steven Da Costa and the best of the 67 kg field could be an opening day highlight. Miho Miyahara could kick off the women’s competition on the same day with another gold for Japan. Ken Nishimura is a favorite at 75 kg. The women’s kata competition is almost certain to be close between Spain’s Sandra Sánchez and Japan’s Kiyou Shimizu.

WHEN IT DEBUTS: Sunday, July 25, with the men’s street competition.

WHY IT’S IN THE OLYMPICS NOW: An Olympic debut sport recruited by organizers to attract young audiences.

WHAT TO LOOK FOR: High-flying tricks and stunts; an astounding age-range, with competitors aged 12 to 47.

STARS TO WATCH: U.S. skater Nyjah Huston, in men’s street, is arguably the best-known skater; in women’s park, 13-year-old Sky Brown has been making waves for Britain with her girl-power bravado, recovery from injury and social media footprint.

WHEN IT DEBUTS: There will be at least three days of competition over an eight-day period, beginning Sunday , though the events are determined the day of based on surf conditions.

WHY IT’S IN THE OLYMPICS NOW: The International Surfing Association has been lobbying the International Olympic Committee since 1995, though the effort to include the sport dates back to the 1912 Summer Games in Stockholm, when Duke Kahanamoku, the five-time medalist in swimming and Hawaiian icon revered as the godfather of modern surfing, first pushed for it to become an Olympic sport.

WHAT TO LOOK FOR: Most maneuvers are either types of turns, airs or barrels. Whereas the men’s competition typically dazzles with explosive airs, the women’s game often features a more dance-like rhythm that showcases the speed, power and flow of the ride.

STARS TO WATCH: Reigning world champion Carissa Moore of the U.S. looks to be the woman to beat, as well as the Australian Stephanie Gilmore, whose record-tying seven world titles makes her the most decorated female surfer in competition today. The Brazilians are expected to dominate the men’s side, with Gabriel Medina and Italo Ferreira known as the masters of aerial maneuvers.

WHY IT’S IN THE OLYMPICS NOW: Climbing has reached new heights in recent years, both in the professional ranks and recreationally. The documentary “Free Solo” — Alex Honnold is not in the Olympics — added to climbing’s popularity, as has the social media expertise of the sport’s top climbers.

WHAT TO LOOK FOR: Sport climbing has been dubbed the epitome of the Olympic motto “citius, altius, fortius” (faster, higher, stronger). Climbers scale a 15-meter wall filled with a variety of holds in the lead discipline. Bouldering involves smaller “problems” and dynamic movements. Speed is a race to the top on predetermined holds.

STARS TO WATCH: Czech climber Adam Ondra has completed some of the most difficult outdoor climbs in the world and is a favorite to earn gold in the sport’s debut. Slovenian Janja Ganbret has a similar resume and has dominated the World Cup Circuit.