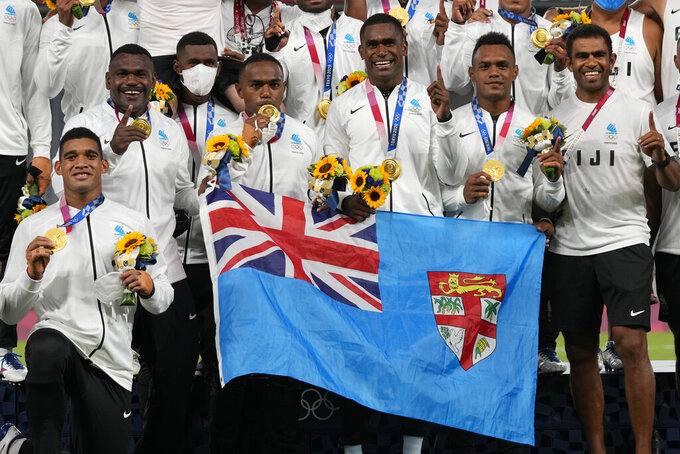 Member's of Fiji's team and staff hold a national flag, as they pose with their gold medals in men's rugby sevens at the 2020 Summer Olympics, Wednesday, July 28, 2021 in Tokyo, Japan. (AP Photo/Shuji Kajiyama) 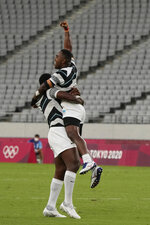 TOKYO (AP) — There's only one player who can really compare the elation of winning Fiji's first Olympic gold medal with the emotions of defending the rugby sevens title.

For Jerry Tuwai, the world sevens series player of the decade and captain of Fiji, the gold medal draped around his neck after Wednesday's 27-12 win over New Zealand meant more than the celebrated prize he took home from Rio de Janeiro five years ago.

It gave the people of his Pacific island nation a reason to celebrate in the midst of a deadly coronavirus outbreak. And to think, he almost quit during the months of enforced separation from his three children.

“I nearly jumped camp because I missed them," Tuwai said, crediting Fiji coach Gareth Baber for convincing him to see a bigger picture and keep the squad together "so we can continue the journey to Tokyo.”

“We’ve been away from our family for about five or six months," he added. "I think this one is special.”

All the rugby sevens medals at the Tokyo Games went to the Southern Hemisphere, with Argentina beating 2016 finalist Britain 17-12 for the bronze. South Africa, the bronze medalist in Rio, beat the United States 28-7 in the playoff for fifth place. Australia beat Canada to finish seventh.

The Fiji government declared a national holiday and the central bank printed $7 notes to commemorate Fiji's gold medal — the country's first Olympic medal of any kind — when rugby sevens made its Olympic debut in 2016.

It'll be hard to top that.

There'll be time to think about it, though. Tuwai's squad has already been in camp in bio-secure bubbles since the first week of April, starting in the Christian hostel in Suva, where they had to build a gym in the garage to remain in isolation, then in Australia and in Japan. There's still a two-week quarantine when they get home.

But there'll be no wild celebrations in the streets across the country this time, for the health and well-being of everyone.

Relative to its population of less than 1 million people, Fiji’s outbreak is currently among the worst in the world. Fiji reported a record 1,285 new cases in a daily update on the eve of the Olympic final. It has reported 193 deaths since the outbreak began in April.

Still, Tuwai said the atmosphere would be brighter for a little while at least.

“I think they’ll not be thinking about the pandemic now,” he said.

Rugby is the national sport in New Zealand and Fiji. But rugby sevens means more to the Fijians, who hone their instinctive passing and one-handed offloads in bare-foot games on beaches and in villages across the islands.

“It’s hard to underestimate the effect this has in Fiji,” head coach Baber said. “It’s something that’s obviously closely linked to national identity. Succeeding as a small nation against the odds, against bigger brothers, it’s particularly good for Fiji.”

The silver was an improvement for the New Zealand men’s team after it missed the podium when rugby sevens made its Olympic debut at the 2016 Rio de Janeiro Games.

“We trained four or five years for this moment .... we just came up a little short,” New Zealand co-captain Tim Mikkelson said, explaining the close team huddle at the end. “It’s not easy to make a final of the Olympic Games. For that moment, we just wanted to congratulate each other.”

The Fijians were always in front in the final, just as they were in Rio, scoring three first-half tries to lead 19-12 at the break. When Asaeli Tuivuaka raced over to score in the right corner with about two minutes remaining, another title was assured.

The stadium was eerily quiet because of the ban on fans, unlike the raucous atmosphere in Rio in 2016. The shouts and yells of encouragement from the bench was all that was needed.

The classification for ninth-12th was completed in the morning session, with Kenya beating Ireland 22-0 for ninth place and 2016 semifinalist Japan finally getting a win to finish off a disappointing campaign at the Tokyo Games — albeit to avoid last place with a 31-19 comeback over South Korea.

Five years after finishing fourth in Rio, Japan kicked off its home Olympic tournament with a narrow loss to Fiji. Winger Lote Tuqiri said the ban on spectators because of the coronavirus pandemic and the competition draw — Day 1 games against Fiji and Britain — hurt the host team.

“Seems like we played our final in the first game,” he said.