France advances to semifinals with 67-64 win over Spain 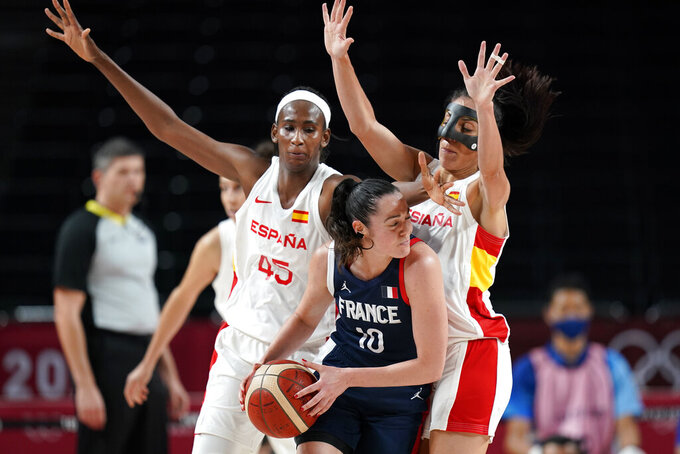 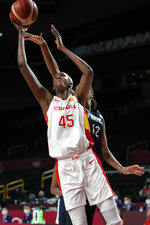 SAITAMA, Japan (AP) — Gabby Williams and her French teammates were all smiles after beating rival Spain and advancing to the semifinals of the women's basketball tournament.

“I don't even know if I can speak, I'm so overwhelmed and happy, this is amazing," said Williams, who is playing in her first Olympics. “I'm trying not to think too much in advance. We don't have anything yet. Yeah we are here, but we can still go home with nothing.”

The French team will face host Japan in the semifinals on Friday in a rematch of a group play game that they lost by four.

“The game we played against Japan was not us,” Williams said. “I think this is the best basketball we've been playing.”

The U.S. plays Serbia in the other medal round matchup.

With France trailing by one with 1:21 left, Williams made two free throws to give the team a 63-62 lead. After forcing a shot clock violation on the next possession by Spain, Johannes banked in a runner coming across the lane with 24.4 seconds left just beating the shot clock herself to make it a three-point game.

Spain wasn't finished as Maite Cazorla drove the lane to get it within one. Alex Duchet was quickly fouled and made the second of two free throws. After a timeout, Silvia Dominguez threw the ball out of bounds and Williams hit one of two free throws and Cazorla's 3-point try was well short.

“In college I was a 40% free throw shooter and now I’m searching for the free throw line,” Williams, who was actually a 73% foul shooter at Connecticut, said of going 3-for-4 from the line in the final 81 seconds. “I was thinking I was going to knock them down.”

When the buzzer sounded Williams spiked the ball and France celebrated at center court posing for photos.

Spain had trailed by seven heading into the final quarter before outscoring France 12-2 over the first 6:30 minutes of the quarter. Cazorla's 3-pointer gave Spain it's first lead since early in the game.

The teams traded baskets over the next few minutes before Williams' free throws gave France the lead for good.

Astou Ndour scored 16 points for Spain, which remained on its bench stunned for 5 minutes after the game.

This game featured the last two silver medalists in the Olympics.

France led 36-30 at the half before Spain got within two early in the third quarter. Johannes scored five quick points to start an 8-0 run. Led 55-48 heading into final quarter.

Spain had gone 3-0 in group play and looked impressive in its wins. France qualified for the quarterfinals despite going 1-2 in preliminary play.