Games people play: A marriage of majors and the Olympics 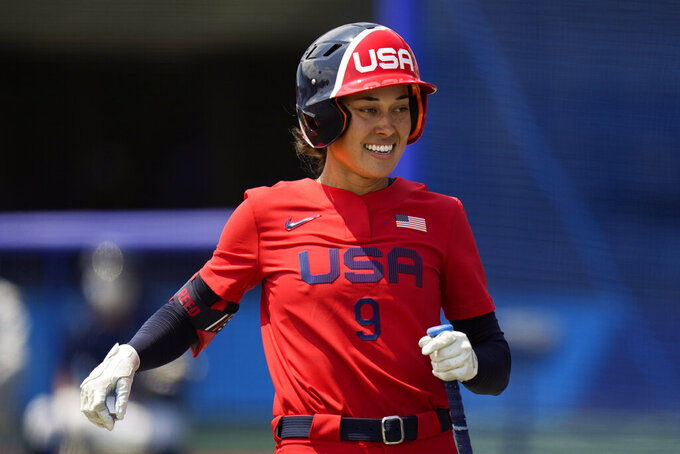 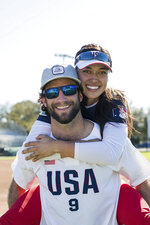 YOKOHAMA, Japan (AP) — Getting ready to reach softball's peak and make her Olympic debut, Janie Reed was on a training field at Marine Corps Air Station Iwakuni in western Japan.

Across the Pacific Ocean, 7,452 miles away, another important family first was unfolding in Miami: Husband Jake Reed was about to walk onto a major league mound for the first time.

“Luckily, the staff was watching the box score,” she said. “And when he came in, they let me kind of slip away for a second so I could watch it.”

They have a one-of-a-kind bicoastal marriage.

Janie is the starting left fielder and No. 2 hitter for the United States as Americans try to regain the gold medal they lost to Japan in 2008. Her sacrifice fly drove in the second run in Wednesday’s opening 2-0 win over Italy and her fifth-inning bunt set up Amanda Chidester’s RBI single in Thursday’s 1-0 victory over Canada.

Jake, a side-arming right-hander, had a 3.38 ERA in six relief appearances for the Los Angeles Dodgers from July 6-18, then was optioned back to Oklahoma City and designated for assignment two days later to open a roster spot for Billy McKinney. If unclaimed, Reed likely will be assigned outright back to Triple-A.

Their work paths cross in soft toss, no easy feat given his submarine release point.

“He’s gotten a lot better,” she said, laughing. “We have to give him a target behind the plate.”

Jake Reed and Janie Takeda met at the University of Oregon in 2011, when they arrived early ahead of their first semesters.

“The freshman athletes kind of just like gravitate toward each other,” he said. “And so being a baseball player, softball player, we started hanging out with some of their team. We, I think, just kind of got to know each other a little bit through just being young freshman and not really knowing anybody else on campus.”

They wound up together in Business 101 and an introduction Family and Human Services course. Six years later, they became the Reeds on Nov. 18, 2017, at a ceremony in Somis, California.

She can remember the first time he watched her play: March 13, 2012, her first home game. Alabama’s Jackie Traina struck her out three times.

“I was a little embarrassed because it was the first time all my new friends saw me play,” Janie said.

She was on the U.S. roster at the 2016 and ’18 world championships, aiming for the restoration of softball at the Tokyo Olympics.

Jake was drafted by the Minnesota Twins in the fifth round in 2014 and spent seven seasons in the minors, getting released by the Twins and Los Angeles Angels before his call-up.

“The nice thing about us playing different positions is I think we both kind of know to stay in our lane for the most part,” Jake said. “There obviously are some things that cross over that we deal with a lot, just as far as the mental side of things, the ups and the downs of the sport. And there are times I think where we’re just completely different athletes.

"I’m very much I guess like a natural athlete and have never really paid too much attention to mechanics and things like that. And she’s kind of the opposite. Her dad’s been her hitting coach since she was a little girl and they’ve been very locked in about her swing and her mechanics her whole life. And so we work really well to balance each other out.”

She is convinced hers is the more difficult training regimen.

“I would say position player and he would agree,” Janie maintained. “We have to be out there all practice, all game. Pitchers get to sit in the bullpen or get their work in, and then they get to chill out.”

Their table talk can turn toward seamhead.

“Janie and I were talking after a ballgame and she says to me, ‘Gosh, coach, that’s exactly what Jake and I just talked about,’” said Ken Eriksen, the U.S. softball manager for the past decade. “And so he is really good for her. And so when they find out, oh, that’s what Jake’s saying, it’s not just coach, that’s what’s happening with the major league guys, that legitimizes the aspect of what we’re all doing, baseball and softball.”

Jake’s call-up moment remains vivid in her mind. She was in Japan when the Dodgers moved him from Oklahoma City to their taxi squad. She already had loaded the MLB At-Bat app onto her phone.

“I just told him before I went to bed, I just said if you need to call me in the middle of the night, please do,” she said. “And so I woke up at 3:45 in the morning to my phone vibrating and I knew right away that it was happening.”

When the Olympics end, she’ll fly to Los Angeles and then meet up with Jake, wherever he is assigned. They have their breakfast routine down.

“Just let the other person lead,” she said. “And a lot of times we’ll just ask each other, ‘How are you feeling?’ Because that’s more important than softball, baseball stuff. We have a good rhythm of how to debrief together. We really value each other’s opinion about performance.”

For now, they root each other on from afar.

“Obviously we wish that we could be in two places at once because there’s no place I’d rather be than right here. But also, I wish I could be there,” she said. “But at the same time, it’s really cool that we’ve both simultaneously reached the height of our sports at the exact same time, which over the eight to 10 years we’ve known each other, it’s kind of crazy that it lined up this way. I don’t really believe in coincidences. I think that that’s how the story was supposed to end up.”