Garnbret keeps her focus on the wall at Tokyo Games 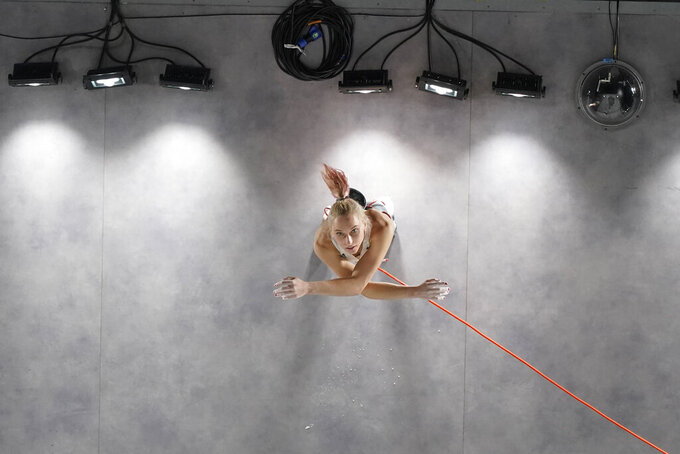 Janja Garnbret, of Slovenia, looks up at the wall prepares to climb during the lead qualification portion of the women's sport climbing competition at the 2020 Summer Olympics, Wednesday, Aug. 4, 2021, in Tokyo, Japan. (AP Photo/Jeff Roberson, POOL)

TOKYO (AP) — The average person would look up at the Olympic lead climbing wall and see a random array of multi-colored shapes.

The bouldering wall? Forget it. They'd have no idea what those crescents, triangles and wedges are even supposed to be, much less consider climbing it.

Janja Garnbret is one of the world's best at picking out the patterns in these puzzles. She has no rival when it comes to putting it all together.

“When you look at the route, you just have a certain image in your head, what to do, where to go” Garnbret said. “You don’t have time to think about anything else. You have to be fully focused on what’s in front of you.”

Garnbret has already accomplished more than most climbers do in a lifetime.

The 22-year-old Slovenian had the typical backstory of an elite climber, scaling whatever she could get her hands and feet on, from staircases to trees as a child. Garnbret dominated the international youth circuit and kept climbing above the rest of the world as a professional, winning nearly everything she entered.

Garnbret rolled a perfect World Cup season in 2019, solving 74 of 78 “problems” while winning all six bouldering events, and has 30 wins overall. She arrived at the Tokyo Olympics as a prohibitive gold medal favorite.

Garnbret has been just as proficient on a rock.

At 16, she “onsighted” — first attempt with no advice — an 8b climb in Croatia and completed her first 9a climb in Spain in 2018. Garnbret also joined her boyfriend, Slovenian climber Domen Skofic, in scaling the tallest chimney in Europe, a 360-meter smokestack from a decommissioned power plant in Slovenia with artificial holds affixed to it.

All those accomplishments, yet she still felt nervous before the start of Olympic qualifying.

The Olympic climbing program has three disciplines, and Garnbret dominates two. Speed climbing takes an entirely different skill set — it's like a sprint up a wall — and it's easily her weakest link.

Speed was the first discipline in qualifying, so it added to the nerves as Garnbret prepared to climb on the world stage. She slipped on both runs and finished 14th of 20 climbers in the event.

“You don’t expect that from me anytime, but I have to admit this time I was pretty nervous,” she said after Wednesday's qualifying. “At the world championships, I'm never nervous or at least not as nervous as I was today.”

After shedding a few tears between rounds, Garnbret fell back into her comfort zone, treating the difficult bouldering problems like she was climbing on playground equipment, quickly completing each in her first attempt. Only two other climbers topped three boulders.

That put Garnbret in solid position to make the finals, barring a big letdown in the final qualifying discipline.

Though not completely focused in lead, she still finished fourth to lead combined qualifying.

“I felt relief because of bouldering I knew that I’m already in the finals, so I didn’t climb my very best in lead,” she said. “I just wanted it to be over to feel no pressure.”

Now all eyes will be on Garnbret in Friday's finals. As she's proven before, no climb is too hard, no spotlight is too bright.