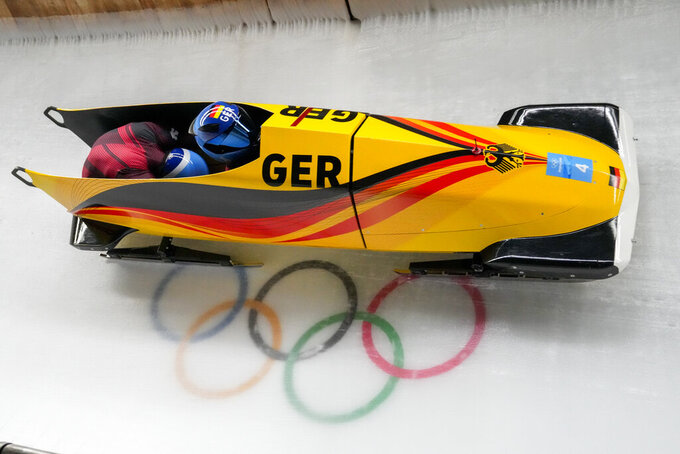 Francesco Friedrich and Thorsten Margis, of Germany, slide during the 2-man heat 1 at the 2022 Winter Olympics, Monday, Feb. 14, 2022, in the Yanqing district of Beijing. (AP Photo/Dmitri Lovetsky) 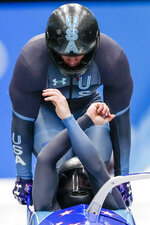 BEIJING (AP) — There’s never been an instance of one nation sweeping the medals in an Olympic bobsled event.

Germany has a chance to change that.

The world’s sliding superpower grabbed three of the top four spots at the midpoint of the two-man competition at the Beijing Olympics on Monday, with reigning world and Olympic champion Francesco Friedrich leading the way.

Friedrich — the overwhelming favorite, seeking a third Olympic gold of his career — teamed with Thorsten Margis to finish their two runs in 1 minute, 58.38 seconds, which was 0.15 seconds ahead of the German sled driven by Johannes Lochner and pushed by Florian Bauer.

Those top two German sleds have separated themselves from all other challengers.

Rostislav Gaitiukevich and pusher Aleksei Laptev of the Russian team are third, 0.94 seconds behind Friedrich. And that Russian sled is only 0.05 seconds ahead of Germany’s team of Christoph Hafer and Matthias Sommer, who currently sit in fourth.

The final two runs are Tuesday.

Friedrich is trying to buck an unusual trend — none of the last three sleds that led after one run of the two-man event held on to win the gold medal. But he opened up a significant margin after the first run, leading Lochner’s sled by 0.24 seconds.

Lochner then was 0.09 seconds faster than Friedrich in the second run.

Olympic rookie Frank DelDuca is the top American sled in the two-man event so far, teaming with Hakeem Abdul-Saboor to hold 15th place in 2:00.09.

“I have some work to do at the start,” DelDuca said. “I’m somewhat pleased with how we did as a whole. I look at what I can do to improve. I think Hakeem did awesome.”

Abdul-Saboor said his pilot was being a bit too hard on himself.

“He did great,” Abdul-Saboor said. “We came out here, we gave it all that we’ve got. We have high standards so we always are reaching for the sky and think we can do better. But I think we’re sitting in a decent spot and we’re just out here to have fun.”

The second U.S. team in the field, Hunter Church and Charlie Volker, are 28th after a troublesome second run. Only the top 20 sleds after three runs will advance to the fourth and final heat on Tuesday.

“I've got to put a really great run together tomorrow," Church said. “It's going to be a battle to get into the top 20, of course."

Volker said there was plenty to clean up before Tuesday.

“You're not going to get anywhere being soft on yourself," Volker said. “We're going to be hard on ourselves and come back with a chip on our shoulder."

The first two runs of two-man came just a few hours after the conclusion of the women’s monobob event, where Kaillie Humphries and Elana Meyers Taylor grabbed gold and silver for the United States — the first gold-silver finish by American sleds in an Olympic bobsled race since 1932.

“Those two are so inspiring for what they do on the ice and outside the ice, just the way they carry themselves, the way they treat people, just the standard they set for bobsledders and people,” DelDuca said. “It’s amazing to even be around them.”

Jamaica returned to the two-man Olympic event after missing the 2018 Pyeongchang Games. Shanwayne Stephens and Nimroy Turgott are last in the 30-sled field. The Jamaicans’ best Olympic finish in two-man was a 27th-place showing by Winston Watts and Marvin Dixon at the Sochi Games eight years ago.