Give me 5: Uhlaender makes 5th US Olympic skeleton team 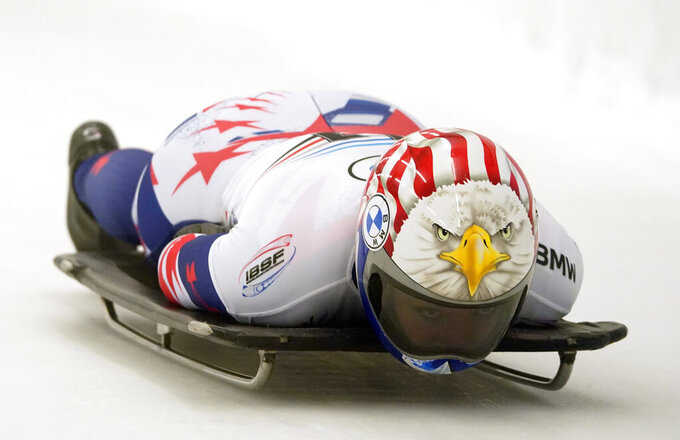 There have now been six U.S. Olympic women’s skeleton teams. Katie Uhlaender has made five of them.

Uhlaender officially became the first American woman from any sliding sport to make five Olympic teams after being named Saturday to the three-person squad that will be heading to the Beijing Games.

It is the smallest team the Americans have nominated in skeleton since the sport returned to the Olympic program in 2002 after a hiatus that lasted more than a half-century. Uhlaender will be joined by two Olympic rookies: Kelly Curtis on the women’s side and Andrew Blaser as the lone men’s qualifier.

They got the word Saturday morning at a team meeting in St. Moritz, Switzerland, the site of this weekend’s World Cup finales for skeleton and bobsled.

“USA Bobsled and Skeleton is incredibly proud of the three athletes nominated to represent Team USA in skeleton at the 2022 Olympics,” USABS CEO Aron McGuire said. “It was a battle to make the team and it came down to the very last race.”

The final race of the World Cup season was Friday morning, and there was a race within the race — three American women vying for two Olympic spots, all of them with realistic chances of making the team.

Uhlaender had the best odds, followed by Megan Henry and then Curtis — who wound up needing the race of her life to make it to Beijing.

And that’s exactly what she got.

Curtis finished a career-best sixth to cap her first full season on the World Cup circuit, which was good enough for her to narrowly leapfrog Henry in the system that the U.S. was using to decide its spots. Henry was 15th in the finale.

Here's one way of explaining how close it was: Curtis finished her two runs on Saturday in 2 minutes, 18.87 seconds — and if she had finished in 2:18.99, not even one-eighth of a second slower, Henry likely would have been going to Beijing.

The nomination of the three skeleton athletes pushes the total number of U.S. sliders selected for the Beijing Games to 11, after an eight-person team from USA Luge was revealed earlier this week. All that’s left is USA Bobsled, which is expected to announce its Olympic teams no later than Monday.