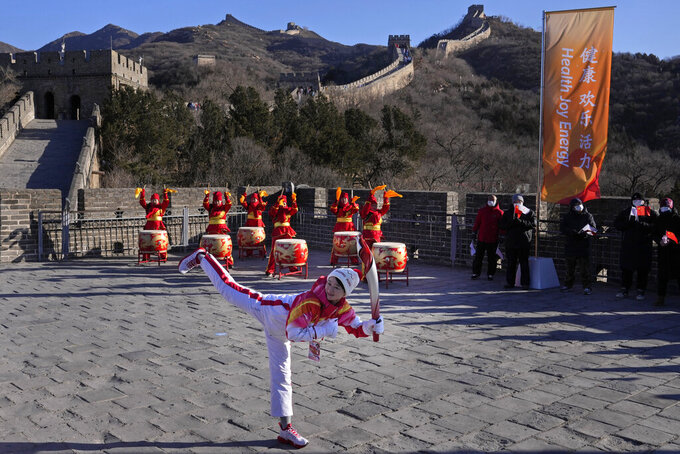 Wu Jingyu, China's Taekwondo Olympic Champion, poses with a kick before taking part in the torch relay for the 2022 Winter Olympics at the Badaling Great Wall on the outskirts of Beijing, China, Thursday, Feb. 3, 2022. (AP Photo/Ng Han Guan)

BEIJING (AP) — Even a shortened Olympic torch relay had time for a stop at the Great Wall of China.

Wu Jingyu, who won gold for China in taekwondo at the 2008 and 2012 Olympics, carried the flame to the iconic landmark on the second day of its journey to the Beijing Games. The relay was cut back to three days because of concerns about the coronavirus.

The staged scene was low on spontaneity, so Associated Press photographer Ng Han Guan decided to shoot the posing athlete off-center and at a slight height.

“It's one of those things that can be campy, so not shooting it directly helps reduce the campiness,” he said. “In that setting, you're trying to keep the grandness of the Great Wall intact.”