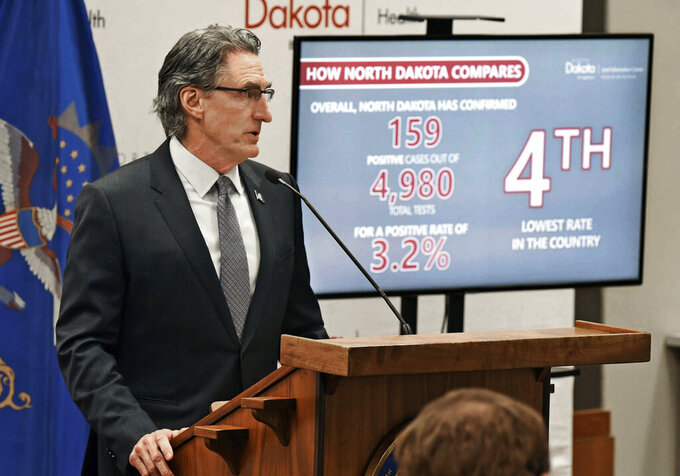 North Dakota Gov. Doug Burgum speaks during a news conference, Thursday, April, 2, 2020 in Bismarck, N.D. North Dakota officials say they are confident the state will have enough hospital beds and equipment to handle the coming flood of coronavirus cases. The one thing they're worried about in a worst-case scenario is having enough health care workers. (Tom Stromme/The Bismarck Tribune via AP)

BISMARCK, N.D. (AP) — North Dakota Gov. Doug Burgum for the second consecutive day Thursday expressed frustration over reports that some residents aren’t taking social distancing seriously as as the number of COVID-19 cases in the state continues to rise.

Some are “taking this serious and some not,” said Burgum, who is one of only about 10 governors nationwide that haven’t declared statewide shelter-in-place orders.

North Dakota health officials on Thursday confirmed 12 more cases of the coronavirus, three weeks after the state's first positive test of COVID-19. The North Dakota Health Department reported a total of 159 cases in the state.

North Dakota has reported three deaths, though none on Thursday. All victims were elderly and had underlying health conditions.

Though Burgum has so far has refrained from declaring a stay-at-home order, he urged residents to “acknowledge and understand the orders we’ve put in place.”

Burgum applauded a move by the largest provider of health insurance in North Dakota that announced Thursday that it will waive out-of-pocket costs for COVID-19 testing and treatment. Blue Cross Blue Shield of North Dakota insures or administers claims for about 375,000 people, or roughly half of the state’s population.

“This is a big deal,” Burgum said, adding that he hoped other health insurance providers would do the same.

Blues said the costs related to the coronavirus will be waived through May 31 for members on group and individual plans.

Scammers “see this pandemic as an opportunity to make a buck,” Stenehjem said. Several North Dakotans already have lost “thousands and thousands of dollars.”

“We can’t get the money back,” Stenehjem said. “The only thing we can do is get the message out.”

On Thursday, the Highway Patrol, which provides security for the governor and the state Capitol, began screening visitors and employees who work in the building with temperature scanning. The tests are administered by aiming a laser thermometer into people’s mouths from several feet away.

People with a high fever aren’t allowed to enter.