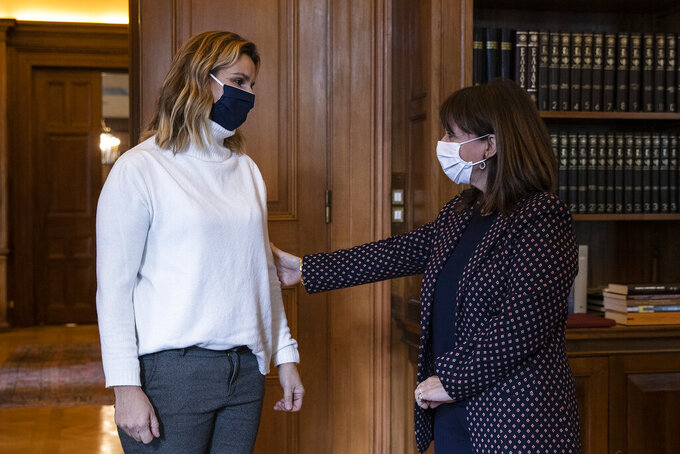 Greek President Katerina Sakellaropoulou welcomes Olympic sailing champion Sofia Bekatorou, left, at the Presidential Palace in Athens, Monday, Jan. 18, 2021. Bekatorou has accused an unnamed sporting official of sexually assaulting her in 1998 during preparations for the Sydney Games. Bekatorou made the allegation Thursday Jan. 14, 2021 while speaking at an online event organized by the ministry of culture and sport. (Alkis Konstantinidis /Pool via AP) 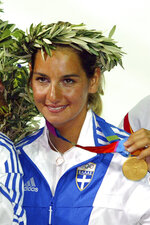 ATHENS, Greece (AP) — Greece's first female president met Olympic sailing champion Sofia Bekatorou on Monday to express her support for the athlete who publicly claimed she had been sexually assaulted 22 years ago by a senior sports official.

Bekatorou, who won gold at the 2004 Athens Olympics, last week said the male official from the Hellenic Sailing Federation performed a “lewd act” after inviting her to his hotel room to discuss team preparations in 1998. Multiple claims by other female athletes of sexual misconduct from sporting administrators followed over the weekend.

“It was the least I could do in recognition of her bravery and dignity,” Greek President Katerina Sakellopoulou said in an announcement. “In meeting her, I met all those women who have been abused, verbally or physically, and injured for life by the moral cruelty of sexual assault.”

A senior member of the sailing federation resigned upon request of the federation Monday and also quit his post with the Hellenic Olympic Committee. The official, who has not been named, indicted or summoned by prosecuting authorities, described the allegations against him as “false, defamatory and deceitful.”

Greek Prime Minister Kyriakos Mitsotakis and other prominent politicians have publicly expressed support for the 43-year-old Bekatorou, who also won a bronze medal at the 2008 Beijing Olympics and six gold medals at world and European sailing championships and was Greece's flag bearer at the 2016 Rio de Janeiro Games as the first athlete to enter the stadium in the parade of nations.

“I want to stress that my personal experience and this individual case is not my only concern,” Bekatorou wrote in a Facebook post late Sunday. "This is about the abuse of power in general, and the current administration of the (failing) federation in particular ... To those still left in the dark, we encourage you to speak out.”