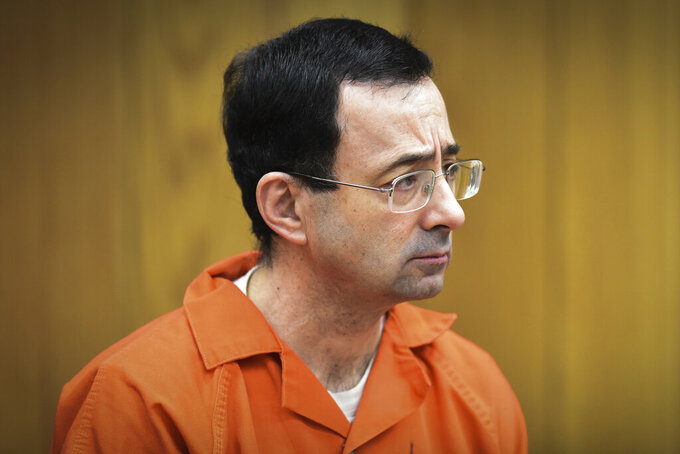 FILE - In this Feb. 5, 2018, file photo, Larry Nassar, former sports doctor who admitted molesting some of the nation's top gymnasts, appears in Eaton County Court in Charlotte, Mich. A judge dismissed criminal charges Wednesday May 13, 2020 against former Michigan State University President Lou Anna Simon arising from Nassar's sexual assault scandal. Simon was ordered to trial last year on charges that she lied to police about her knowledge of a sexual misconduct complaint against Nassar, who was a campus doctor and now is serving decades in prison. (Matthew Dae Smith/Lansing State Journal via AP, File)

A judge’s dismissal of criminal charges against former Michigan State University President Lou Anna Simon is the latest development from the Larry Nassar sexual assault scandal that has rocked the school.

Simon was ordered to trial last year on charges that she lied to police about her knowledge of a sexual misconduct complaint against Nassar, who was a campus doctor and now is serving decades in prison. A judge Wednesday dropped the charges against Simon.

— Lou Anna Simon: The university president and school alumna resigned in January 2018 amid growing pressure. She denied any cover-up by the university. She was later charged with two felonies and two misdemeanors, charges a judge dropped Wednesday. She had been accused of lying during an interview when investigators were trying to determine how Nassar got away with sexual assault for so long.

The MSU governing board later hired former Michigan Gov. John Engler. He resigned amid fallout from remarks he made about some of Nassar's victims and was replaced by Satish Udpa, the school's executive vice president for administration.

In May 2019, MSU named Dr. Samuel Stanley Jr., a medical researcher who had led Stony Brook University in New York for nearly a decade, as its next president.

— Kathie Klages: The former head gymnastics coach resigned in 2017 after she was suspended for defending Nassar over the years. Klages was charged with lying to investigators. She was convicted in February and faces up to four years in prison.

— Brooke Lemmen: The former school doctor resigned in 2017 after learning the university was considering firing her because she didn't disclose that USA Gymnastics was investigating Nassar. A state Department of Licensing and Regulatory Affairs investigation cleared her of any violations in 2018.

— William Strampel: The former dean of the university's College of Osteopathic Medicine was charged in March 2018 amid allegations that he failed to keep Nassar in line, groped female students and stored nude student selfies on his campus computer. Strampel, who has also been named in lawsuits, retired even as Michigan State was trying to fire him. He was found guilty June 12 of neglect of duty but acquitted on a more serious criminal sexual-conduct charge. Strampel was sentenced Aug. 7 to a year in jail.

— Bob Noto: The university in February 2018 announced the departure of its longtime vice president for legal affairs. The school called it a retirement. Noto had been Michigan State's general counsel since 1995.

— Rhonda Faehn: The former senior vice president of the organization was dismissed in January 2019 by the University of Michigan after working for just a few days as a coaching consultant for its women's team. She was fired after an outcry over her hiring. USA Gymnastics parted ways with Faehn as senior vice president in May 2018 after she was criticized by Nassar's victims for not contacting authorities about potential abuse concerns.

— Valeri Liukin: The coordinator of the women's national team for USA Gymnastics announced in February 2018 that he was stepping down, less than 18 months after taking over for Martha Karolyi. Liukin said that while he wanted to help turn around the program, "the present climate causes me, and more importantly my family, far too much stress, difficulty and uncertainty."

— USA Gymnastics said in January 2018 that its entire board of directors would resign, as requested by the U.S. Olympic Committee. The USOC then took steps to decertify the gymnastics organization that picks U.S. national teams, and USA Gymnastics filed a Chapter 11 bankruptcy petition as it attempted to reach settlements in the dozens of sex-abuse lawsuits it faces and to forestall its potential demise at the hands of the USOC.

— Steve Penny: The former president and CEO of the organization resigned under pressure in March 2017. He was replaced by Kerry Perry, who took over in December 2017. Penny has pleaded not guilty to a third-degree felony alleging he ordered the removal of documents relating to Nassar from the Karolyi Ranch in Texas.

— Former California U.S. Rep. Mary Bono was hired in October 2018 as the interim president for USA Gymnastics only to resign four days later. Bono said she felt her affiliation with the embattled organization would be a "liability" after a social media post by Bono criticizing Nike and former San Francisco 49ers quarterback Colin Kaepernick drew widespread scrutiny within the gymnastics community. Six-time Olympic medalist Aly Raisman also questioned Bono's association with a law firm that advised the organization on how to handle portions of the Nassar scandal.

— Ron Galimore: The longtime USA Gymnastics chief operating officer resigned in November 2018 but denied any wrongdoing in the Nassar scandal. The Indianapolis Star reported earlier that an attorney hired by USA Gymnastics directed Galimore to come up with a false excuse to explain Nassar's absence at major gymnastic events in the summer of 2015. The organization was looking into complaints against Nassar at the time.

— USA Gymnastics said in January 2018 that the Texas ranch where a number of gymnasts said Nassar abused them would no longer serve as the national training center. Owners Martha and Bela Karolyi have since sued the USOC and USA Gymnastics, seeking damages for a canceled sale of the property. They also have been named in lawsuits.

— Scott Blackmun: The CEO resigned in February 2018, citing difficulties with prostate cancer and the federation's need to move forward to deal with the sexual abuse scandal. There had been calls for his departure.