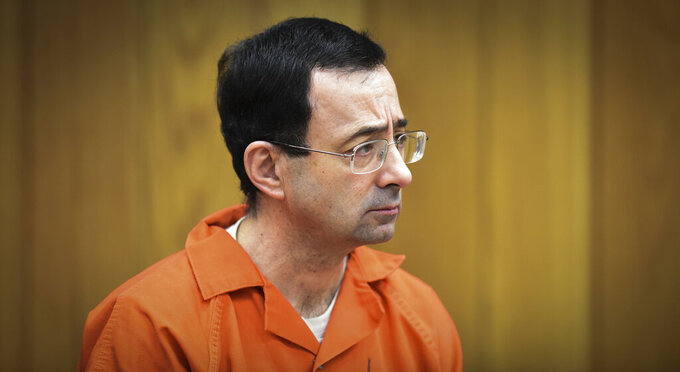 FILE - In this Feb. 5, 2018 file photo, Larry Nassar, former sports doctor who admitted molesting some of the nation's top gymnasts, appears in Eaton County Court in Charlotte, Mich. The sentencing Tuesday, Aug. 4, 2020, of former Michigan State University head gymnastics coach Kathie Klages to 90 days in jail for lying to police during an investigation into ex-Olympic and university doctor Larry Nassar is the latest development from the sexual assault scandal that has rocked the school.  (Matthew Dae Smith/Lansing State Journal via AP, File)

The sentencing Tuesday of a former Michigan State University head gymnastics coach Kathie Klages to 90 days in jail for lying to police during an investigation into ex-Olympic and university doctor Larry Nassar is the latest development from the sexual assault scandal.

— Lou Anna Simon: The university president and school alumna resigned in January 2018 amid growing pressure. She denied any cover-up by the university. She was later charged with two felonies and two misdemeanors, charges a judge dropped in May. She had been accused of lying during an interview when investigators were trying to determine how Nassar got away with sexual assault for so long.

— Kathie Klages: The former head gymnastics coach resigned in 2017 after she was suspended for defending Nassar over the years. Klages was charged with lying to investigators. She was convicted in February and sentenced Tuesday to 90 days in jail.