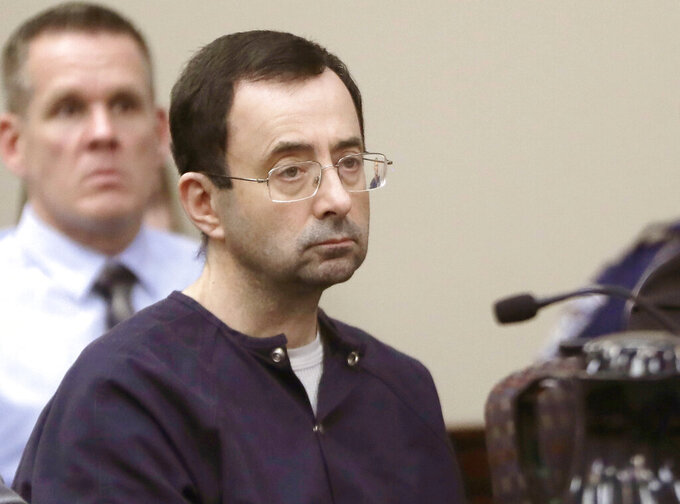 John Geddert died soon after he was accused of injuring people for years through forced labor and recruiting minors for forced labor, according to court documents.

— Lou Anna Simon: The university president and school alumna resigned in January 2018 amid growing pressure. She denied any cover-up by the university. She was later charged with two felonies and two misdemeanors, charges a judge dropped last May. She had been accused of lying during an interview when investigators were trying to determine how Nassar got away with sexual assault for so long.

— Kathie Klages: The former head gymnastics coach resigned in 2017 after she was suspended for defending Nassar over the years. Klages was charged with lying to investigators. She was convicted in February 2020 and sentenced in August to 90 days in jail.

— The university agreed in August 2019 to resolve a federal civil-rights investigation related to Nassar.

— John Geddert: The owner of the Michigan club died by apparent suicide Thursday after he was charged with crimes, including sexual assault, human trafficking and running a criminal enterprise. He was suspended in 2018 by USA Gymnastics and announced his retirement. He was the U.S. women's coach at the 2012 Olympics. Geddert had said he had "zero knowledge" of Nassar's crimes.