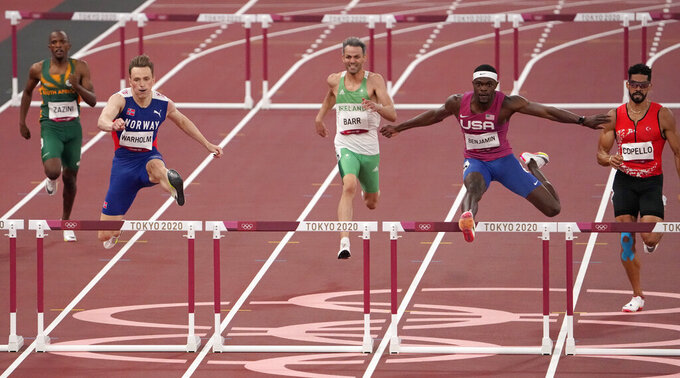 Any of that could explain how Sydney McLaughlin and Dalilah Muhammad have pushed hurdling into a new golden age. Or maybe the best reason for the renaissance, according to the best hurdler in history, is that they have each other.

“I wish I’d had that kind of competition when I was running,” Edwin Moses told The Associated Press. “I knew I could run 46.5, but I never had to work that hard at the beginning of a race, let alone at the end.”

Moses, the man who once won a remarkable 107 finals in a row from 1977-87 and who lowered the world record to 47.02 seconds during his prime, says he has been enjoying watching hurdlers break new barriers over the past two years.

The drama is expected to reach a crescendo this week at the Tokyo Olympics.

McLaughlin and Muhammad, who have lowered the world record in each of their last three races on a major stage, are expected to square off in the final Wednesday. Karsten Warholm of Norway has been rewriting the record book on the men's side, and a showdown with Rai Benjamin of the U.S. is in the offing Tuesday.

Only four men have ever cracked 47 seconds. On July 1, Warholm broke a 29-year-old record held by Kevin Young when he finished in 46.70 in his first race of the season, in Oslo.

The others to crack 47 are Samba Abderrahman, the Qatari who is also in Tuesday's final and Benjamin, the American who ran 46.83 at Olympic trials in June.

On the women's side, Muhammad and McLaughlin have been going back and forth for a few years.

Muhammad set the world record at the U.S. nationals in 2019, finishing in 52.20 and beating McLaughlin by more than a half-second. Nine weeks later at world championships, Muhammad lowered the record to 52.16. McLaughlin's time of 52.23 in that race would have been a world record had she run it three months earlier.

McLaughlin changed coaches, starting work with Bobby Kersee, and after a down year because of the COVID-19 pandemic, all signs pointed to another record going down. But she didn't wait until she arrived in Tokyo. McLaughlin became the first woman to crack 52 seconds at the U.S. Olympic trials last month, running 51.90 and setting the stage for more this week.

“It's just one of those times in our sport, and especially in this event, where people are realizing that they can run this fast and it’s kind of everybody moving at the same pace,” McLaughlin said.

Meanwhile, Muhammad dealt with injuries and a bout with COVID-19, and had not reached top form. She felt her second-place finish in 52.42 at trials was more than respectable given what she'd been through.

Moses isn't counting her out for Tokyo — either for the gold medal, or as the one who could lower the world record again.

“She might be in a better position. Less races. Very experienced. A real student of the hurdles. Understands that race completely,” he said. “In a fast race, which you have to expect, it goes to whoever makes the least mistakes after the seventh hurdle and stays with a pattern to maximize the time.”

Moses said McLaughlin and Muhammad have gotten into such good shape that they can often cover the area between hurdles in 15 strides, whereas 16 or 17 was long the standard for women.

“Their training cycle is all year long, versus it just being a seasonal sport where they would just get ready for summer like we did,” Moses said. “They're also running less meets. It's like eight to 10 a year. We used to run 15 or 20.”

Enhanced shoe technology that has overtaken the sport in every event combines with new track surfaces — the track seems fast in Tokyo — to create conditions that help runners go faster, regardless of the event.

It leads Moses to wonder how low he might have gone with today's equipment. Nobody will ever know, but he is impressed with what today's crop of hurdlers is doing with the sport he defined back in the day.

“Right now, if one of these contenders is in a race and they do everything right, there's no doubt they can be the one to break a world record again by a tenth of a second,” Moses said. “It can happen any time.”