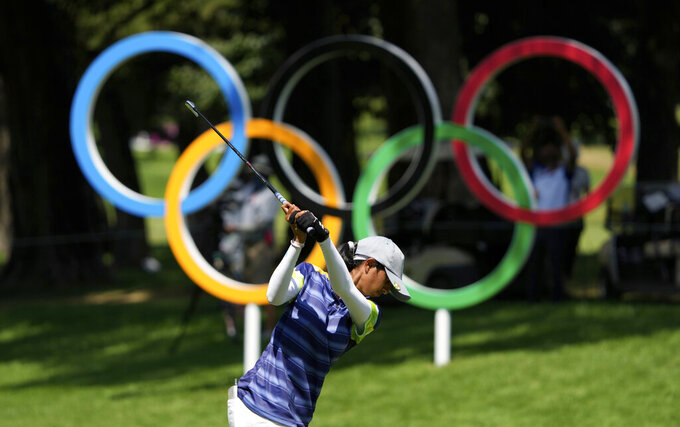 Aditi Ashok, of India, hits a tee shot on the 17th hole during the third round of the women's golf event at the 2020 Summer Olympics, Friday, Aug. 6, 2021, at the Kasumigaseki Country Club in Kawagoe, Japan. (AP Photo/Darron Cummings)

KAWAGOE, Japan (AP) — Aditi Ashok isn't one to pound balls at the driving range while poring over Trackman data and fixating on her ball speed for hours on end.

Still, Ashok couldn't help but laugh when told she ranked 59th in driving distance through the first three days of the women's Olympic competition. She knew third-round leader Nelly Korda was blowing it by her as they made their way around Kasumigaseki Country Club on Friday.

“I was always short but not like 50 (yards) behind Nelly,” she said, smiling.

Not that the gap seemed to bother her while posting a 3-under 68 on Friday, moving her at 12-under and pulling her within three of Korda heading into the final round. Heady territory for a player who spent a portion of the spring recovering from COVID-19 and has just one Top 10 finish since 2018.

Ashok figures she's lost 15 yards on her drives and five yards with the rest of her clubs as part of the residual fallout from a trip home to India to pick up her passport that turned into a more extended stay after she tested positive for the coronavirus. She missed one tournament, then failed to make the cut in three of the next four before teaming up with Yealimi Noh to finish third at the Great Lakes Bay Invitational in mid-July.

She could sense things were coming together as her second trip to the Olympics drew near.

Ashok shot in the 60s in the first two rounds in Rio de Janeiro five years ago before fading to 41st. As as a teenager, she used that performance as a springboard to a pro career that's operated a bit in fits and starts with her father Gudlamani serving as her caddy.

Gudlamani stayed behind this time around as Ashok made good on a promise to have her mother Mash on her bag in Japan. The partnership appears to be working after rounds of 67, 66 and 68.

“This is the best I've played all year,” Ashok said.

Asked if this means her dad is out of a job, Ashok just laughed.

“He's enjoying watching me on TV and he enjoys listening to (the analysts) commentate on my game,” she said. “It’s funny because, yeah, he never gets to see me play on TV.”

He may be joined by more than a few others during the final round. Ashok's sport of choice — particularly among women — is still largely ignored in India, where cricket dominates everything. Yet the Olympics remain a very big deal, one of the reasons her playing under the rings could create far more attention than anything she might do on the LPGA Tour, major tournaments included.

She chalks the disconnect up to a lack of awareness, though she believes she's seen an uptick since she wore an orange cap with her country's flag on it in Brazil in 2016.

“I think within the golf community it has boosted it a little bit because they know that if somebody can make it (to the Olympics) and then make it on Tour the next five years then, yeah, it’s something all other Indian girls, young girls, can do,” she said.

It's a lot of weight to carry, though Ashok said she's trying to block it out. There's enough to worry about just trying to hang with Korda and potentially deliver India its sixth medal of the Tokyo Games.

Ashok hardly looked intimidated while teeing it up with Korda, the world's top-ranked player. Ranked 200th, Ashok expertly navigated her way around the 6,079-yard course, sometimes hitting hybrids to the green while Korda flipped 8-irons. Ashok made up the difference with her putter, one of the reasons she's made just three bogeys through 54 holes.

In a way, her father's absence has helped. Ashok admits there are times she can become overly reliant on him. Her mother prefers to just hand her daughter the club and let her figure it out.

“I just know I have to commit to whatever I’m doing and maybe I have gotten a couple of them wrong," she said, “but I think it’s better to be decisive than to be correct.”

For three days, Ashok's been both.