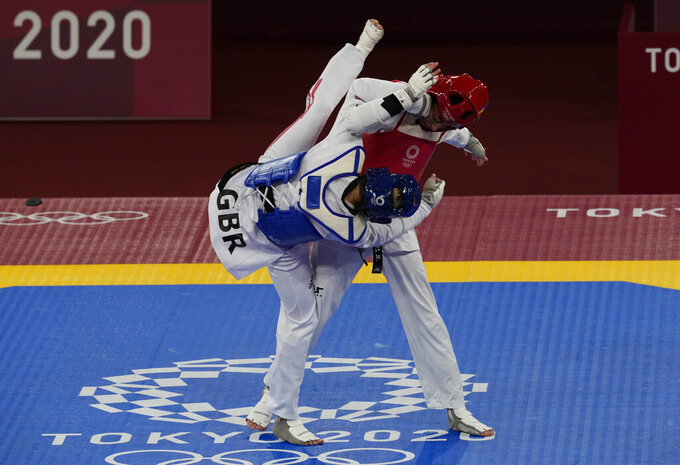 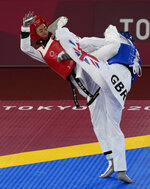 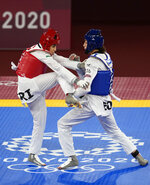 Alizadeh won bronze in Rio de Janeiro for Iran, becoming her homeland's first female Olympic medalist. After she defected to Germany early last year, she qualified for Tokyo as a refugee athlete and won her first three bouts to get to the brink of a historic medal, but was denied in two straight losses.

After beating Iran's Nahid Kiyani Chandeh in her opening bout Sunday in Tokyo, the 23-year-old Alizadeh shocked two-time Olympic gold medalist Jade Jones in the round of 16, beating the British champion 16-12.

She beat Zhou Lijun of China 9-8 in the quarterfinals with a stirring final-minute rally, but lost to Russian opponent Tatiana Minina 10-3 in the semifinals of the women's 57-kilogram division.

Alizadeh had a narrow lead after the first round against İlgün, but failed to score again until it was too late to catch up.

The refugee team has never won an Olympic medal in its two Games since its creation in 2016 to provide opportunities to victims of political persecution and war. Ten athletes competed in its inaugural Games in Rio, and it has three taekwondo competitors — all of them training in Germany — among its 29 athletes in Tokyo.

Alizadeh became an 18-year-old hero in Iran for her Olympic success, but she cited institutional sexism and the mandatory wearing of the hijab headscarf in her criticisms of the Iranian system when she decided to defect. She castigated Iran for using her for propaganda purposes in a passionate letter announcing her defection on social media, calling the decision “harder than earning Olympic gold.”

Alizadeh hadn’t competed between 2018 and this year due to injuries before her departure from Iran but the pandemic-caused postponement of the Tokyo Games helped Alizadeh to reach the Olympics again: She was granted refugee status in Germany last February, allowing her to compete in the European qualifiers.

Alizadeh opened her Tokyo run by beating Kiyani, her close friend, who wore a headscarf for their bout. Alizadeh entered the Makuhari Messe convention center hall with her head uncovered and her hair free. She acknowledged the Iranian coaching staff afterward.

Alizadeh's finest moment in Tokyo was a massive upset of Jones, who was attempting to become the first three-time taekwondo gold medalist and the first British woman in any sport to win gold at three consecutive Olympics.

Their bout was tied 10-10 with just 30 seconds left, but Alizadeh scored a pair of two-point body kicks to take the lead before hanging on for the four-point victory.

Alizadeh screamed and celebrated with her coach while the small crowd of Olympians and support personnel in the arena erupted with astonished roars at the biggest upset of the taekwondo tournament.

Zhou took a 6-4 lead into the third round of their quarterfinal, but Alizadeh tied it on a body kick with 90 seconds left. Alizadeh jumped three points ahead on a dramatic head kick with 40 seconds left, but Zhou replied with a two-point body kick moments later.

Alizadeh avoided trouble in the final seconds and hung on for a victory that left her flat on her back on the mat in celebration.

Alizadeh is very popular on social media, where she added several thousand more admirers to her Instagram account in the hours immediately after her victory over Jones.

She made the latest in a series of high-profile defections from the Iranian sports system by athletes dissatisfied with the government's treatment and policies.

In April, the International Judo Federation suspended Iran for four years because the nation refused to allow its fighters to face Israelis. The IJF said Iran’s policies were revealed when former Iranian judo competitor Saeid Mollaei claimed he was ordered to lose in the semifinals of the 2019 world championships in Tokyo to avoid potentially facing Israeli world champion Sagi Muki in the finals.

Mollaei defected to Germany in 2019, and he is representing Mongolia at the Tokyo Olympics when he begins competition Tuesday.