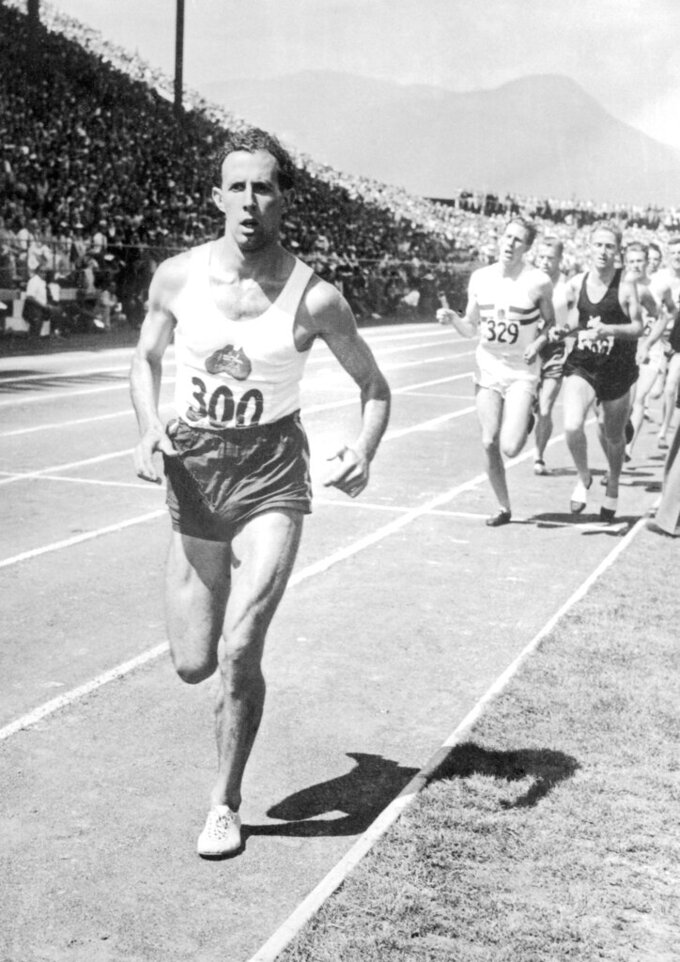 FILE - John Landy of Australia leads the field at the end of the first lap of the mile race during the Empire Games, now known as the Commonwealth Games, in Vancouver, Canada, on Aug. 7, 1954. Landy, an Australian middle-distance runner who dueled with Roger Bannister to be the first person to run a four-minute mile, has died, his family said Saturday, Feb. 26, 2022. He was 91. (AP Photo, File)

John Landy, an Australian runner who dueled with Roger Bannister to be the first person to run a four-minute mile, has died. He was 91.

Landy's family on Saturday said the former athlete, who also became governor of Australia's Victoria state, had died at his home in Castlemaine after a long battle with Parkinson’s disease.

“Dad passed away peacefully on Thursday surrounded by what he loved most: his family and the Australian bush,” Landy’s son Matthew Landy said. "He was a wonderful father, a loving husband and we feel privileged to have been a part of his remarkable life.”

Landy took up competitive running to help him get fit to play Australian rules football, only becoming serious about it after making a state track and field squad in 1951.

Later he was to make world headlines as he vied with Englishman Bannister to become the first man to run under four minutes for the mile.

Bannister was the first to achieve the feat, in a time of 3 minutes, 59.4 seconds at Oxford, England on May 6, 1954. Less than two months later, in Finland, Landy improved on Bannister’s world record when he ran the mile in 3:57.90.

Those two times preceded the 1954 Empire Games in Vancouver where Landy and Bannister, the world’s two fastest milers, met face-to-face in a showdown billed as the Race of the Century. The Englishman won and soon after retired to become a neurologist.

At the 1956 Melbourne Olympics, Landy was the favorite to win the “metric mile,” the 1,500 meters. But it was in the lead-up to those Games that Landy earned his place in Australian sporting history.

Running in the Australian Mile Championship in 1956, Landy was in a strong position when fellow athlete Ron Clarke tripped and fell in front of him with about a lap and a half to go.

Landy leaped over Clarke and then turned back to help his rival to his feet, a gesture that cost him valuable seconds and around 50 meters. After checking on Clarke, he began running again and circled the field to win the race that assured him a place in Australia's Olympic team.

Landy never made a big deal of the gesture, describing it as “that silly race when I whizzed back to Ron Clarke."

“I reacted on the spur of the moment," Landy told the Australian Associated Press. “I ran down his arm with my spikes when I was jumping over him. That’s why I went back. A lot of people seemed to think it was the most significant thing I ever did in running. It wasn’t.”

Landy won bronze in the 1,500 at the 1956 Melbourne Olympics, finishing third behind Ron Delany of Ireland and Klaus Richtzenhain of Germany.

World Athletics president Sebastian Coe said in a statement that Landy was one of the great pioneers of the golden age of middle-distance running in the 1950s.

“He lit the spark that led to the legendary chase for the four-minute mile between 1952 and 1954 and was one of main protagonists in that quest,” said Coe, the two-time 1,500-meter Olympic gold-medal winner. “Ultimately Roger Bannister got there first but was also the first to recognize that Landy’s excellence inspired him to reach that historic landmark.”

Landy went on to work in the field of agricultural science, a subject he studied at Melbourne University, and held various positions in sporting and community organizations.

In 2001 he became governor of Victoria — representing the British royalty in the state — a post he held for five years.

“His rivalry with Roger Bannister, as the pair closed on the sub four-minute mark for the mile, captured not only Australia’s imagination, but that of the world."