The Latest: Bencic, Sakkari return to 4th round at US Open 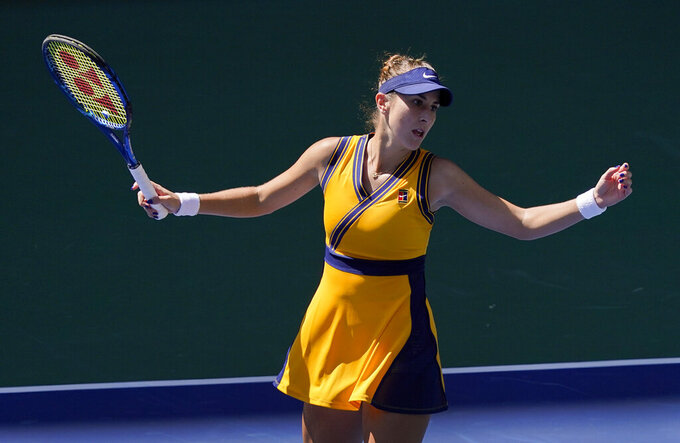 Belinda Bencic, of Switzerland, reacts during the third round of the US Open tennis championships against Jessica Pegula, of the United States, Saturday, Sept. 4, 2021, in New York. (AP Photo/Seth Wenig)

Tokyo Olympic gold medalist Belinda Bencic and French Open semifinalist Maria Sakkari are back in the fourth round at Flushing Meadows after straight-set victories.

The 11th-seeded Bencic eliminated No. 23 Jessica Pegula 6-2, 6-4 in a rematch from the Summer Games.

Bencic was a semifinalist at the 2019 U.S. Open for her best Grand Slam showing.

The 17th-seeded Sakkari collected her eighth victory this season against an opponent ranked in the top 20 by defeating two-time Wimbledon champion Petra Kvitova 6-4, 6-3.

Sakkari hit nine aces, was never broken and has made it to Week 2 at the U.S. Open for the second year in a row.

Kvitova finished with more than twice as many unforced errors, 34-16.

Bianca Andreescu is now 10-0 for her U.S. Open career and back in the fourth round of the tournament she won in 2019.

The sixth-seeded Canadian had little trouble advancing with a 6-1, 6-2 victory over 104th-ranked Greet Minnen of Belgium. Minnen got into the field as a "lucky loser" — someone who lost in qualifying but moved into the main draw when another player withdrew.

Minnen has never beaten a top-10 player and never had much of a chance in this one. It took barely more than an hour as Andreescu delivered 21 winners and made just 11 unforced errors, while saving all four break points she faced.

Andreescu beat Serena Williams in the final in New York two years ago in her U.S. Open debut at age 19. Andreescu then missed last year's trip to Flushing Meadows with one of a series of injuries that have interrupted her still-young career.

Next for her will be a match against either two-time Wimbledon champion Petra Kvitova or 17th-seeded Maria Sakkari.

Novak Djokovic will try to avoid a recent run of upsets at Flushing Meadows and improve to 24-0 in Grand Slam matches this season when he takes on Kei Nishikori in Arthur Ashe Stadium to highlight third-round action.

Djokovic has won his past 16 matches against 2014 U.S. Open runner-up Nishikori.

Djokovic is attempting to complete the first calendar-year Grand Slam in men's tennis since Rod Laver won all four major championships in 1969.

No. 1 Ash Barty and Tokyo Olympic gold medalist Alexander Zverev are due to play in Arthur Ashe Stadium at night.