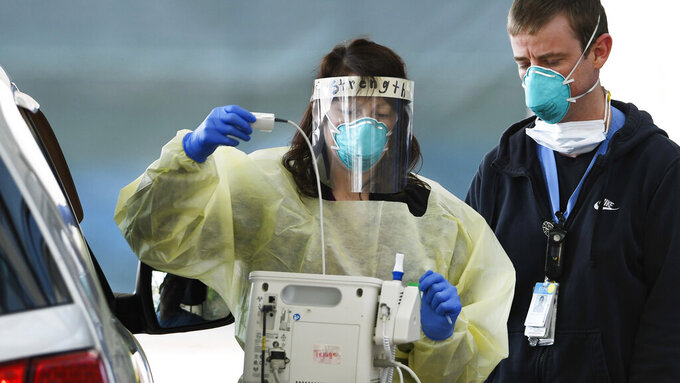 RALEIGH, N.C. (AP) — The COVID-19 outbreak has reached into North Carolina's Legislative Building, where a cafeteria employee tested positive for the virus, the building's manager said.

The unidentified worker was sent home March 26 after showing symptoms and received the positive test result Wednesday, Legislative Services Officer Paul Coble wrote to legislative staff. The cafeteria closed Wednesday indefinitely for cleaning. Employees working with the person have been asked to self-quarantine.

Snack bars at the building and at an adjoining office building were being cleaned and expected to reopen Thursday for takeout only, Coble wrote.

On Thursday morning, state health officials reported that positive cases of the virus had grown to 1,857 statewide. There have been 16 deaths, and about 180 people are currently hospitalized.

Meanwhile, state unemployment claims increased by 20,000 on Wednesday, to a total of 353,000, since March 16. The majority were related to COVID-19. About $8 million in coronavirus-related claims have been paid since the state started disbursing them this week, and that number is going to greatly increase, said Lockhart Taylor, assistant secretary of the state's commerce department. He said the state has added server capacity and hired more people to handle the influx of claims.

Four inmates at three state prisons have tested positive for the virus, said Todd Ishee, the state's commissioner of prisons. Four prison staff members at four locations have also tested positive. Measures to curb the spread of the virus in the prisons include the suspension of visitations and screening the temperatures of people who enter the facilities.

At the Legislative Building cafeteria, patrons had not been prevented from sitting down to eat, although very few had done so in recent days, as legislative activities have been curtailed dramatically. In contrast, Gov. Roy Cooper's March 17 executive order barred dining inside restaurants statewide.

Coble said in an email that Cooper's restriction didn't apply to the legislature's eateries, citing "separation of powers" between state government's three branches. The legislative branch, for example, can set rules for its operations.

Regular government oversight committee meetings have been canceled at the legislative complex since mid-March, and workers have been allowed to telecommute. The General Assembly is supposed to convene April 28.

For most people, the new coronavirus causes mild or moderate symptoms, such as fever and cough that clear up in two to three weeks. For some, especially older adults and those with existing health problems, it can cause more severe illness, including pneumonia, and death.