Lia Thomas plans to keep swimming - with an eye on Olympics 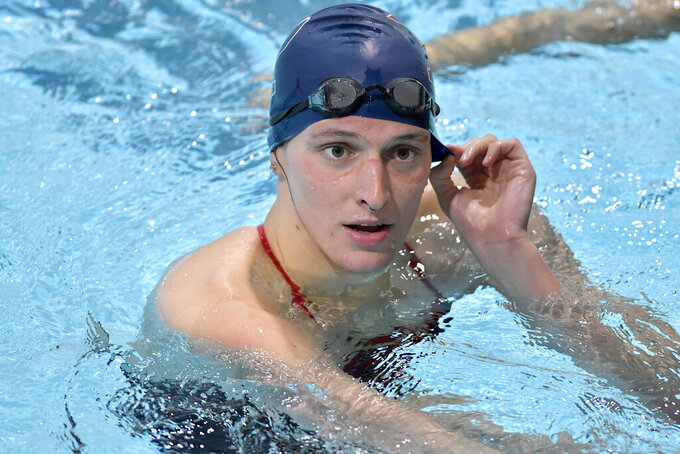 FILE - Transgender swimmer Lia Thomas speaks to her coach after winning the 500 meter freestyle during a meet with Harvard on Jan. 22, 2022, at Harvard University in Cambridge, Mass. In an interview that aired Tuesday, May 31, 2022, on ABC's “Good Morning America,” Thomas disputed those who say she has an unfair biological edge that ruins the integrity of female athletics. (AP Photo/Josh Reynolds, File)

Transgender swimmer Lia Thomas said she intends to keep competing, with the ultimate goal of reaching the Olympics.

In an interview that aired Tuesday on ABC's “Good Morning America,” Thomas also disputed those who say she has an unfair biological edge that ruins the integrity of women's athletics.

"Trans women are not a threat to women’s sports,” she said.

Thomas became a leading symbol of transgender athletes — stirring both opposition and support — when she joined the Penn women's swim team after competing for three years on the men's squad at the Ivy League school.

In March, Thomas won the women's 500-yard freestyle at the NCAA championships in Atlanta, becoming the first transgender woman to claim a national title in swimming. She has since graduated from Penn and plans to attend law school, in addition to pursuing her goal of qualifying for the 2024 U.S. Olympic swimming trials that will determine the team for the Paris Games.

“I intend to keep swimming,” Thomas told ABC. “It’s been a goal of mine to swim at Olympic trials for a very long time, and I would love to see that through.”

USA Swimming has used a review panel to make individual determinations on a case-by-case basis since 2018. Thomas would need approval from the governing body to attempt to qualify for the next Olympic trials.

Thomas, who grew up in Austin, Texas, said she fell in love with swimming at age 4 but felt increasingly disconnected from her body as she grew older.

After high school, Thomas earned a spot on the men’s swimming team at Penn. But by her sophomore year, she struggled with deep depression and suicidal thoughts.

“I was barely going to classes. I could really barely get out of bed,” she recalled, finally telling herself: "I can’t live like this anymore. I want to live again. I want to be able to do things I enjoy.”

Thomas said a fear of not being able to compete in the sport she loved kept her from transitioning initially. But at the end of her sophomore year, she began hormone replacement therapy.

“The mental and emotional changes actually happened very quickly. I was feeling a lot better mentally. I was less depressed," she said. “And I lost muscle mass and I became a lot weaker and a lot, a lot slower in the water.”

Thomas began swimming on the Penn women’s swimming team at the start of her senior year, following NCAA guidelines in place at the time that athletes must complete one year of hormone replacement therapy to change gender categories.

The scrutiny over Thomas grew as she achieved far more swimming success competing against women than she did before.

Transgender athletes have now become a prominent political target, with many conservative states pushing through laws that require high school athletes to compete as the sex they were assigned at birth.

The NCAA has changed its transgender eligibility guidelines to allow each sport to follow the rules set by each sport’s national governing body.

Thomas, in the interview with ABC, pushed back on some of the criticism she received particularly during her senior season, when she rarely spoke to the media. She scoffed at the notion that she transitioned in order to have more success as a swimmer.

“We transition to be happy and authentic and our true selves," she said. "Transitioning to get an advantage is not something that ever factors into our decisions.”

Thomas also said it's not fair to prevent transgender people from competing in sports, or to limit them to competing only against each other.

“In addition to not allowing the full athletic experience, that’s incredibly othering to trans people who already face immense discrimination in other parts of our lives,” Thomas said.

She said the highlight of her college graduation was hearing her name called as Lia Thomas.

“When I actually got to walk across the stage and hear them say my name," she said, “it was very cool.”