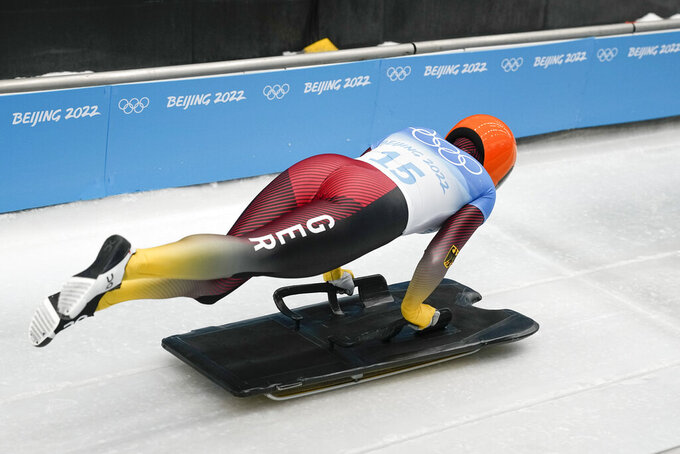 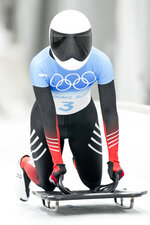 BEIJING (AP) — The last time Australia won an Olympic medal in a sliding sport? That would be never.

Never even been close, with the country’s best result in any bobsled, skeleton or luge race being a 10th-place showing in 2010.

Jaclyn Narracott is now two runs away from changing everything.

The 31-year-old Brisbane native — a distant 16th at her only other Olympic appearance four years ago — is the leader midway through the women’s skeleton event at the Beijing Games. Her first two runs on Friday were timed in 2 minutes, 4.34 seconds, putting her 0.21 seconds ahead of Germany’s Hannah Neise and 0.23 seconds ahead of another German, Tina Hermann.

“This field is ridiculously competitive,” Narracott said. “To be sitting on top of it is phenomenal. I knew it was going to be a good race and if I could put down two runs where I was calm and composed I’d be in the mix, but that doesn’t make it any less exciting to be No. 1.”

A lot is still up in the air.

There are eight women within 0.53 seconds of the lead heading into Saturday night’s final two runs, including five-time U.S. Olympian Katie Uhlaender. She finished Friday in 2:04.87, meaning she’s only three-tenths of a second behind Hermann right now for the bronze-medal position.

“I feel the best I’ve ever felt at an Olympics,” Uhlaender said. “I feel the most prepared, mentally.”

Uhlaender is using the same runners — the steel tubes that sit between the sled and the ice — that U.S. men’s Olympian Andrew Blaser is using in Beijing. It was a last-minute decision by Uhlaender to ask Blaser to share his runners, and it paid off.

A medal would be worth at least a $15,000 bonus from the U.S. Olympic and Paralympic Committee for Uhlaender. If it happens, Blaser's generosity won't be forgotten, she promised.

Kelly Curtis of the U.S. is 18th after two runs in her Olympic debut. China’s Zhao Dan, who epitomizes home-ice advantage by having more runs on this track than any other international slider — by a huge margin — is in fourth, squarely in the medal hunt.

The 19-year-old has appeared in the grand total of four World Cup women’s skeleton races, with an average finish of 19th. She’s never competed in the world championships. Her lone win in a sanctioned international race was in the equivalent of sliding’s minor leagues, the Intercontinental Cup circuit back in December. But she’s right there with the medal hopefuls.

“Every one of us obviously is very good, especially in the women’s,” Neise said. “It’s very tight. It’s been very tight in the whole season.”

Narracott wasn’t much of a contender this season, finishing 17th in the World Cup standings. She won the World Cup finale at St. Moritz, Switzerland, four weeks ago, saying she benefited there from having her husband and coach — Dom Parsons, who won a bronze for Britain at the 2018 Pyeongchang Games — alongside her for the first time since October.

Parsons is with her in Beijing, too. The extra set of eyes is working wonders, she said.

“All year, we were doing it via FaceTime and with video,” Narracott said. “To have him by my side, seeing the ice as I’m seeing it ... it’s huge.”

Almost all the golds won by Australia at the winter games have come in either alpine skiing or snowboarding. The last — and only — time an Australian won a gold medal in any ice sport was 2002. And that was only after everyone else crashed in a short-track speed skating race, allowing Steven Bradbury to prevail.

Bradbury was well back of the other four finalists in the 1,000-meter race at the Salt Lake City Games, a quarter-lap or so behind heading into the final turn. He had no chance, until those other four skaters — U.S. legend Apolo Ohno among them — took each other out. Bradbury simply cruised by the carnage and won gold by staying on his feet.

Narracott won’t need that kind of help on Saturday night, when the women’s medals are decided — and Olympic-crazed Australia might get a sliding champ for the first time.

“I think it's just born into us," Narracott said of Australia's Olympic passion. “We all grow up knowing that representing the green and gold is the pinnacle, whether that's the Olympics, world champs, whatever it is. There's just that pride in the uniform."