NBA studying ways to bring games back overseas in future 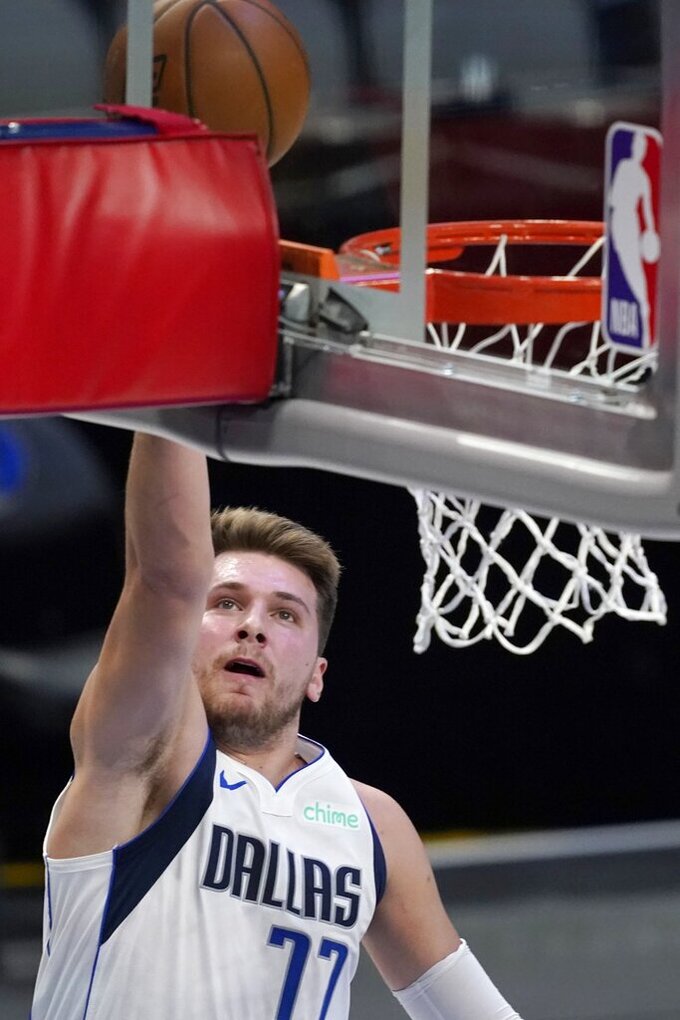 Dallas Mavericks guard Luka Doncic goes up for a shot in the first half of an NBA preseason basketball game against the Minnesota Timberwolves in Dallas, Thursday, Dec. 17, 2020. (AP Photo/Tony Gutierrez)

The NBA is still looking at scenarios that could allow teams to play in Europe and China again next season, deputy commissioner Mark Tatum said Tuesday.

Tatum also said the NBA’s season-opening doubleheader Tuesday night would be shown in China on Tencent, a league streaming partner. But the coronavirus pandemic is preventing the league from playing any games outside the U.S. this season, except possibly a return by the Toronto Raptors to Canada — something that won’t happen before March at the earliest.

Typically, the NBA has played preseason games in China and takes some regular-season games to Mexico and Europe. This season's plans called for a game in Paris, though the pandemic forced those to be tabled.

“We do anticipate that once it becomes healthy and safe to be able to do that that we’ll return to a schedule of international preseason and regular-season games,” Tatum said on a call with international reporters.

NBA games were available on Tencent last season even while the league and the Chinese government worked through a very strained relationship — an October 2019 tweet by then-Houston general manager Daryl Morey showing support for anti-government protesters in Hong Kong prompted major fallout, including state broadcaster CCTV not showing any NBA games for a full year. CCTV put the NBA back on its channel lineup for the last two games of the NBA Finals last fall.

Commissioner Adam Silver said at the All-Star break this past February that the league’s issues with China would lead to perhaps as much as $400 million in lost revenue — and that was before the pandemic struck and led to even more revenue missed leaguewide.

“There’s no doubt that we have a long history in China, a more than 40-year history of doing business in China, and that we remain committed to people-to-people exchange with the hundreds of millions of fans that we have there,” Tatum said. “Playing global games has been and will continue to be an important part of how we engage with our fans in China and in other parts of the world, as well.”

Tatum’s comments came on the day the NBA revealed its roster breakdown of international players for this season; 107 such players from 41 countries made opening-night rosters, including a record 17 Canadian players and a record-tying 14 African players.

“It’s just not the quantity of the players but the quality,” Tatum said. “These are some of the best players in the game.”

The NBA regular season is scheduled to run through mid-May, with the playoffs going from May 22 through July 22. That has led to much speculation about NBA players being able to participate in the Olympics, which open in Tokyo on July 23.

There are 24 nations — Greece, Canada, Serbia and Slovenia among them — scheduled to compete starting in late June for the final four spots in the Olympic men’s tournament. Japan, the U.S., Argentina, Iran, Nigeria, France, Spain and Australia have already qualified.

Tatum said the NBA is working closely with the International Olympic Committee and FIBA, the sport’s global governing body, to ensure there is “the best possible schedule for everybody involved." And it's possible that the finalizing of Olympic rosters could be pushed back to allow NBA players the maximum amount of time before making decisions on whether to play or not.

“It's my expectation that our federation, FIBA, together with the IOC, will also work with us on potential accommodations, even in terms of when rosters would otherwise need to be submitted, recognizing that they’re going to need to be more flexible and work with us this season given how much uncertainty there is around the virus," Silver said earlier this week.