Olympic chief, leader in spat after Brisbane gets 2032 nod 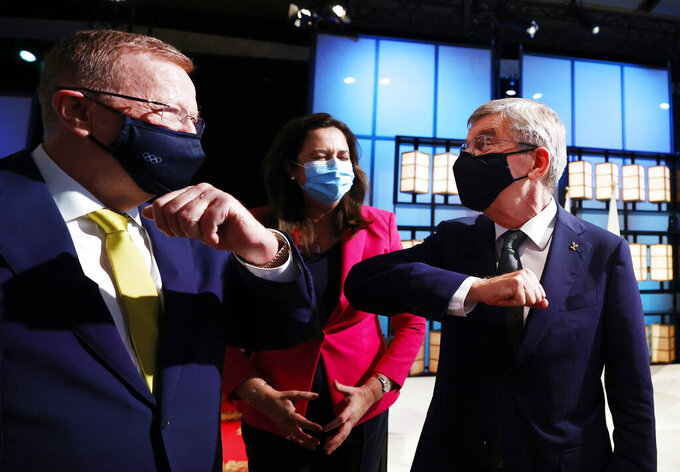 President of the International Olympic Committee Thomas Bach, right, bumps elbows with members of the Brisbane 2032 delegation, from left, John Coates AC, President, Australian Olympic Committee and The Honourable Annastacia Palaszczuk MP, Premier of Queensland and Minister for Trade, after Brisbane was announced as the 2032 Summer Olympics host city during the IOC Session at Hotel Okura in Tokyo, Wednesday, July 21, 2021. (Toru Hanai/Pool Photo via AP)

BRISBANE, Australia (AP) — Australia’s highest-ranking Olympic official and the current premier of the state of Queensland where the 2032 Summer Games will be held have put an early test to the old adage that sports and politics don’t mix.

Hours after Brisbane was given the hosting rights for the Games 11 years down the track following an International Olympic Committee vote in Tokyo on Wednesday, Australian Olympic Committee President John Coates had a public disagreement with Queensland state Premier Annastacia Palaszczuk.

The issue at the late night news conference in Tokyo? Whether Palaszczuk and other members of the city’s delegation, including the Brisbane mayor and a federal sports minister, should attend the Tokyo Olympics opening ceremony on Friday.

Palaszczuk indicated she’d be staying in her hotel room.

That didn’t sit well with Coates, a powerful vice-president for the IOC and one of the driving forces behind Brisbane having received the hosting rights so soon without any real competition.

“You are going to the opening ceremony,” Coates told Palaszczuk rather pointedly. “There will be an opening and a closing ceremony in 2032 and all of you, everyone there, has got to understand the traditional parts of that, what’s involved in an opening ceremony.

“None of you are staying home and going to be sitting in your room.”

The premier did not respond to Coates’ suggestion and declined to say why she would not attend the ceremony -- “I don’t want to offend anybody, so . . ." She had told critics of her trip to Tokyo that she was only attending the IOC meeting to make a final pitch for the Games and wouldn't attend other functions.

After Palaszczuk was asked why it would be more beneficial to sit in her Tokyo hotel room instead of traveling only a relatively short distance to the National Stadium for the ceremony, she didn’t respond.

Coates did on her behalf.

“You’ve never been to an opening ceremony,” he said to Palaszczuk. “You don’t know the protocols and I think it’s a very important lesson for everyone here — opening ceremonies cost in the order of $75 million to $100 million. My very strong recommendation is the premier and the Lord Mayor and the minister be there and understand it.”

Tom Heenan, a Monash University lecturer in Melbourne who specializes in the politics behind the Olympics, said those kinds of comments from an Olympic official “never fail to surprise me."

“The IOC sets the stage, they are all powerful and have no problem dictating terms to political leaders," Heenan said in a telephone interview with The Associated Press. “The fact that the head of the AOC said that he or she should attend is another indication of Olympic autocracy."

Heenan said it's the same reason why the Tokyo Olympics are going ahead despite record new cases of COVID-19 in Japan.

“They push aside public opinion in the middle of a pandemic," Heenan said. “It's only up to the IOC to cancel. All power rides with them."

Later Thursday, Coates issued a statement saying that his comments “have been completely misinterpreted by people who weren’t in the room." And suggesting that Palaszczuk will be attending the opening ceremony on Friday.

“Absolutely I believe the premier should come to the opening ceremony and she has accepted," Coates said. “The premier and I have a long-standing and very successful relationship. We both know the spirit of my remarks and I have no indication that she was offended in any way."