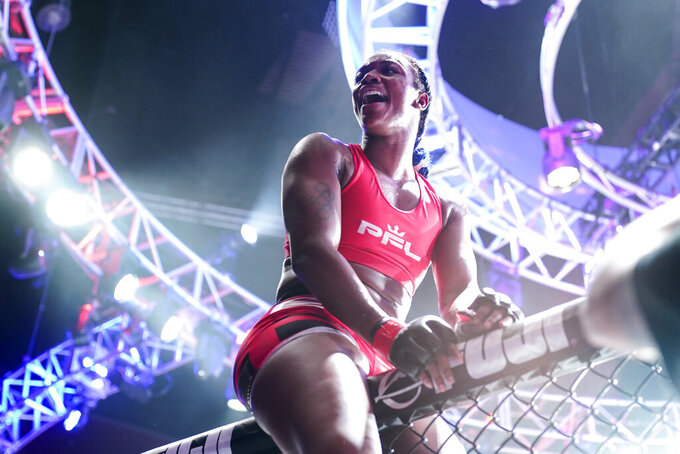 ATLANTIC CITY, N.J. (AP) — Claressa Shields found herself pinned on her back, stuck against a cage and she absorbed so many strikes to the head that the undefeated boxer seemed on the brink of defeat in MMA.

“I could have went home with an L like that,” Shields said.

So, she dug deep in her debut for the fortitude that took her from Flint, Michigan, to Olympic gold — twice — and then a pro career that made her the most decorated fighter of her time.

“I got myself going with those big right hands,” she said. “My right hand has never failed me.”

From the squared circle to the cage, Shields had her mighty hand take over — and had it raised in victory.

Shields made short work of Brittney Elkin, and the mixed martial arts novice proved she might have a future in the sport with a TKO win on Thursday night in the main event of a Professional Fighters League card.

“I’m not losing this fight,” the undefeated boxer said.

Shields proved in her 155-pound lightweight fight she’s just as adept at unleashing a beating in mixed martial arts. She shook off a slow first two rounds before she got Elkin on the ground and needed a few heavy shots to cause the decisive damage. She earned the win with a right hand from the top at 1:44 of the third round.

“I feel like I am dreaming. This is crazy,” she said.

Shields ditched some of the flamboyant costumes she’s worn in boxing (where she's 11-0) for straight red trunks and top. She still wore her hair in a blue ponytail to raise awareness to the clean water fight that’s gone on for years in her Michigan hometown.

She already won the light middleweight, middleweight and super middleweight crowns in her boxing career and was the fastest fighter in history — either male or female — to become a three-division world champion. Shields only started her MMA training in December at the Jackson Wink MMA Academy in Albuquerque, New Mexico.

Shields calls herself the GWOAT — yes, the Greatest Woman Of All Time,

At least in boxing.

In MMA, her inexperience showed early. Elkin took Shields down early in the first round and mounted her as she pounded the rookie in the face. Shields took more of a beating in one round than she did over most of her pro boxing career.

Elkin landed a big right early in the second that did little to rattle Shields. Elkin went back to the mount and kept the career boxer on her back. Shields escaped trouble late in the second and swung and missed on a wild right before she connected on more head shots that set the stage for the third round.

Shields cut a wide swath of fans: 76ers center Dwight Howard wrote “Let’s go champ” on Instagram and actress Rosie Perez tweeted “Best of luck tonight.” Ray Lewis, who has an equity stake in PFL and serves on its advisory board, watched cage-side and admired Shields’ decision to shift to MMA while still in the prime of her boxing career.

“The genius of champions making transitions is they start all over and don’t care,” said Lewis, the Hall of Fame linebacker for the Baltimore Ravens. “Lot of people are afraid to start over. They end their careers, I’m stuck, I’m good. But when you make that transition, you’re chasing something else. I think she’s chasing something else and just that’s good to see. I just love her adapting to it.”

CEO Peter Murray said Shields would fight one more time this year for PFL before a decision was made for 2022.

“This is just her first step to prove to herself that she has really what it takes to make the ’22 season,” Murray said.

One potential dream match for 2022 in the PFL would have Shields fight Kayla Harrison. Harrison, a two-time Olympic judo gold medalist, has emerged as the face of PFL. Harrison (9-0) fights again on June 25.

Unlike other MMA organizations, the PFL uses a season format, with playoffs and a championship fight night that awards a $1 million prize for each of its six weight class champions. Four fighters each in PFL’s featherweight and men’s lightweight division advanced on Thursday.

Shields was billed as fighting in PFL’s first showcase fight.

Murray said that PPV is on the horizon for PFL. Thursday’s card aired on ESPN2, and the league has yet to decide when or where it will stage its championship fight night. The PFL held its two previous finales on Dec. 31 in New York. Murray said the fight card could come before December.