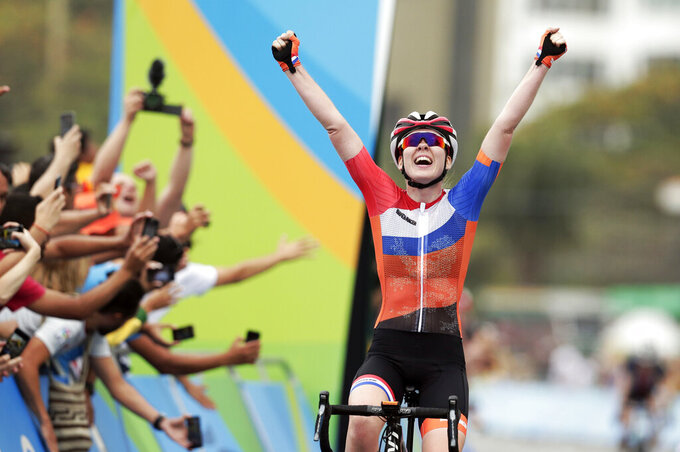 FILE - Anna Van Der Breggen, of the Netherlands, celebrates after crossing the finishing line to win the women's cycling road race final at the 2016 Summer Olympics in Rio de Janeiro, Brazil, in this Sunday, Aug. 7, 2016, file photo. The men's and women's road races kick off the cycling program at every Summer Olympics. “Everybody in the world is trying to figure out how to beat the Dutch girls,” said Jim Miller, the high performance director for USA Cycling. (AP Photo/Victor R. Caivano, File)

The men's and women's road races kick off the cycling program at every Summer Olympics, yet the pair of races that will depart from Musashinonomori Park and finish at Fuji Speedway in late July could not be more different.

The men's race should be a wide-open affair with dozens of potential winners, many of them coming off a grueling slog at the Tour de Franc e. The women's race will amount to the four-woman Dutch team taking on everyone else.

All eyes will be on the races, too. They offer two of the first gold medals for an Olympics that has been delayed an entire year by the COVID-19 pandemic, and that many in Japan still believe should not happen. And they come on the heels of the Tour, which Olympics partner NBC will have been broadcasting daily on its networks for much of the previous month.

“Everybody in the world is trying to figure out how to beat the Dutch girls,” said Jim Miller, the high performance director for USA Cycling. “The only way to deal with them is isolate and reduce their numbers, but they're super strong. They have three world champions and their fourth rider will be at some point. All are super fast, capable of going long — any scenario.

“It's the Dutch's race to win or lose," Miller added, "and every other nation is going to race off how they control the race.”

That includes the women's time trial, where three-time Olympic champion Kristin Armstrong has retired. She now coaches Chloe Dygert, the American standout who is coming back from a catastrophic crash at last year's world championships.

And the men's time trial, where the form of riders coming off the Tour usually plays a big role in who captures gold. Geraint Thomas of Britain is example No. 1 — he dislocated his shoulder during a crash in Stage 3, and how the the Ineos-Grenadiers leader recovers on the roads of France will have a big impact on how he performs on the roads of Japan.

Organizers shuffled the Olympic program to insert mountain bike between the road races and time trials, effectively moving the event from one of the last of the entire Summer Games to the opening weekend of competition.

In the men's race, defending champion Nino Schurter of Switzerland will go for his fourth consecutive Olympic medal. Swiss teammate Mathias Fluckiger, Britain's Tom Pidcock and Mathieu van der Poel — who wore yellow during the Tour de France but will switch to the dirt for the Olympics — should contend for the podium.

Loana Lecomte has dominated the World Cup season, but French teammate Pauline Ferrand-Prevot and the American team of Haley Batten, Kate Courtney and Chloe Woodruff promise to be in the mix at the course in the Shizuoka Prefecture.

The new discipline for the Tokyo Games should be a medal bonanza for the U.S., which features two of the world's top five men (Justin Dowell and Nick Bruce) and women (Hannah Roberts and Perris Benegas). The X Games-style trick competition at Ariake Urban Sports Park, which has been added to the Olympic program in a bid to attract a new and younger audience, is the only cycling discipline in Tokyo that will be decided by judges.

The U.S. also should factor into BMX racing, which debuted at the London Games in 2012. Gold medalist Connor Fields and silver medalist Alise Willoughby return five years after their success in Rio to lead a team that could sweep the top step.

Worth watching is whether the lack of competition over the past two years gives an off-the-radar rider a chance to snare a medal. More than any other discipline, the pandemic has wreaked havoc with BMX events around the world.

Britain has dominated events in the velodrome during the past two Olympic cycles, and despite a scandal that caused major changes to the team structure, Jason Kenny and Co. should be hard to beat at the track in the small city of Izu.

Kenny, who has come out of retirement, has six gold medals and a silver on his resume, and another gold would break a tie with Chris Hoy for most among British cyclists. Kenny’s wife, Laura, will try to add to her own four gold medals.

Returning to the program is the Madison, an event for two-rider teams that was dropped for the London Games because there was no equivalent event for women. Now, the men will be joined by the women in the Madison for the first time.