At Olympics, Holcomb still an inspiration for USA Bobsled 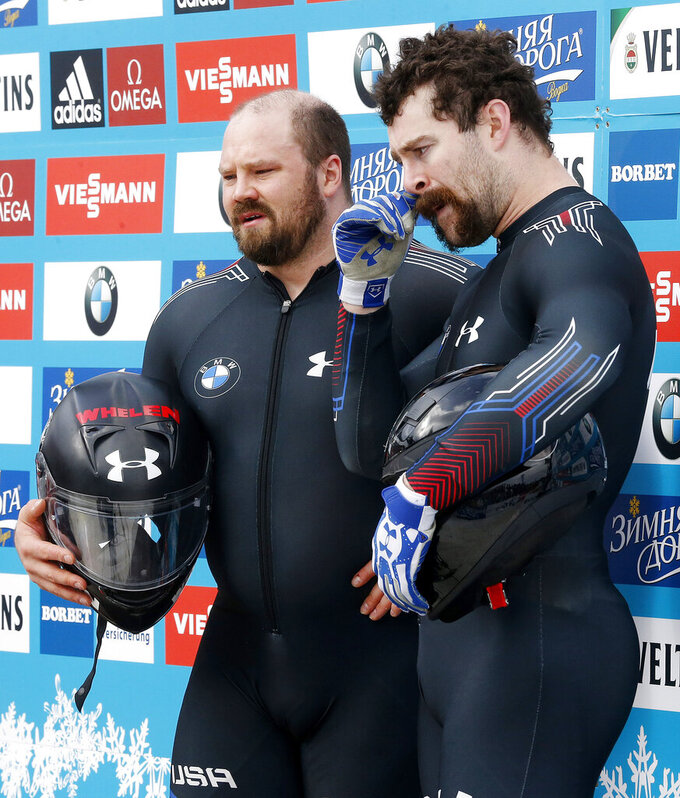 FILE- U.S. Steven Holcomb, left, and Carlo Valdes stand on the podium after the last run in the two-man bobsled competition at the Bob and Skeleton World Championships in Winterberg, Germany, Sunday, March 1, 2015. Five years since Holcomb was found dead in his room at the Olympic Training Center in Lake Placid, he is still felt within the program. “I definitely made my peace with him being gone a long time ago,” said Valdes, who used to push for Holcomb. “Now, it’s about how I can help people understand the type of person he was — especially the guys on the team now." (AP Photo/Michael Probst, File)

BEIJING (AP) — By now, Steven Holcomb might have been part of the USA Bobsled coaching staff. Perhaps he would have been involved in research and development. Or maybe he would be recruiting and wooing the next generation of sliders.

Yet make no mistake: nearly five years after his death, Holcomb is still felt within the program.

The Beijing Games are the second Olympics to take place since Holcomb was found dead in his room at the Olympic Training Center in Lake Placid, New York, on May 6, 2017. He would have been a certain pick for the team that competed at the Pyeongchang Games four years ago, and it isn’t completely unthinkable that Holcomb — who would be 41 — might have gotten a few final Olympic runs by competing in this year.

USA Bobsled vowed to never forget him. So far, that promise has been kept.

“It’s a very interesting thing for me,” said U.S. push athlete Josh Williamson, who joined the bobsled program about a month after Holcomb’s death. “The way that all my teammates and friends and the coaching staff, the way they speak about him, the stories, the example that he set ... it’s always ‘Holcomb used to do it like this.’ In a weird way, it’s like I know Steve.”

Holcomb won 62 World Cup medals in his sliding career, including 29 golds. He was a three-time world champion and three-time Olympic medalist — a gold from the four-man race at the 2010 Vancouver Games, and silvers from the two- and four-man events at the 2014 Sochi Olympics. Holcomb never held those silvers; he left Russia with bronze medals, which were upgraded to silver as part of the ramifications of Russia's state-sponsored doping scandal. The silvers were awarded in 2019, almost two years after he died.

His three medals were tied for the most in USA Bobsled Olympic history until earlier this week, when Elana Meyers Taylor won her fourth for the United States by grabbing a silver in monobob behind Kaillie Humphries.

“One of my biggest regrets as a young slider in this sport was not utilizing Steve more,” U.S. pilot and first-time Olympian Hunter Church said. “I was always very shy as a young slider and Holcomb was kind of an idol of mine growing up. And all of a sudden, I was standing next to the Tom Brady of bobsled, some might say. And because I was bashful, I never got to really grasp his knowledge.”

Holcomb was beloved. Still is. Sliders from other teams were drawn to him. He had a larger-than-life personality, never seeming to take himself too seriously. One of his signature moves was to rip open his speedsuit after a run and reveal a Superman T-shirt underneath.

Thing is, to USA Bobsled, he was a real-life superhero.

“I definitely made my peace with him being gone a long time ago,” said U.S. push athlete Carlo Valdes, who used to push for Holcomb. “Now, it’s about how I can help people understand the type of person he was — especially the guys on the team now. You tell them, ‘This is what Steve did, this is what he told me, this is how he told me to handle this situation, this is what he’d say now.’ ... They take that to heart and they know the expectations because they’re the ones that he set. They’re still trying to get there. So, he’s still very much involved.”

DelDuca used to be a pusher on Holcomb's team. When DelDuca decided to learn how to drive, Holcomb sent him good-natured texts saying that they were going to be enemies going forward.

DelDuca has upgraded his phone five times since. He kept the phone with those messages from Holcomb.

“We still talk about him all the time," DelDuca said. “He’s one of the greatest to ever do it, one of the nicest people you’ve ever met. There’s just so much we gained from having him and so much we lost. He's amazing. Often times, we talk like he's still here — because we want him to be."

The reminders of Holcomb are everywhere. Humphries adored him, even though they were never teammates since she was racing for Canada when he was driving for the U.S. Last year on her way to winning at the world championships, she used a set of runners on her sled that Holcomb used to have on his sled. Those runners also made their way to Beijing, a lucky charm of sorts.

“A big portion of this was for him, too,” Humphries said, tears streaming down her face, after winning the world women’s title last year.

Meyers Taylor was equally moved this week to learn that her fourth Olympic medal passed Holcomb’s U.S. record. She called it bittersweet — and no explanation was required.

“I never really wanted to break any of them,” she said, when asked about Holcomb’s marks. “He’s part of the reason I’m here to begin with. He guided me through most of my career. I wouldn’t be here without him. That’s all I can say. To be in that kind of company is just incredible.”

The American bobsledders will return home after the Beijing Games and start the process of resetting for a new Olympic cycle leading into the 2026 Milan-Cortina Olympics. Valdes is retiring. Meyers Taylor is talking about retiring. The list of U.S. sliders who ever were teammates of Holcomb’s will become even shorter.

But the USA Bobsled vow will remain: Holcomb will still be an inspiration.

“He’s still very much on our minds,” Valdes said, “but only in a good, positive way.”