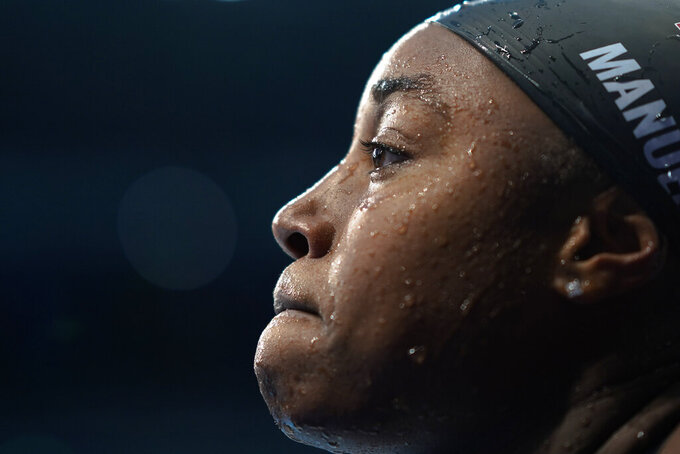 Australia's Emma McKeon can make some Olympic history, too.

The final day of swimming at the Tokyo Aquatics Centre is teeming with storylines, led by the world's two aquatic superpowers.

Dressel is favored to win his third individual gold in the 50-meter freestyle Sunday before nine days of competition ends with the men's 4x100 medley relay — an event the Americans have never lost at the Summer Games.

Dressel's quest for six golds ended with a U.S. flop in the 4x100 mixed medley relay Saturday, though it was no fault of his own.

In a new Olympic event that features two men and two women swimming in any order, Dressel was more than 8 seconds behind when he took over the anchor leg in last place. That was far too much of a deficit to make up and he touched in fifth.

Dressel's time in Tokyo has produced far more triumph than disappointment. Billed as the successor to Michael Phelps, he has lived up to the hype with three golds — including a world record in the 100 butterfly — and a chance to win two more.

If Dressel comes through, he'll join Americans Michael Phelps, Mark Spitz and Matt Biondi and East German Kristin Otto as the only swimmers to win at least five golds in a single games (Phelps, of course, did it three times).

McKeon could leave Tokyo with even more medals than Dressel.

McKeon is favored in the women's 50 free and will be part of an Australian 4x100 medley relay that attempts to take down the two-time reigning champion Americans.

If McKeon cashes in with both events, she'll become the first woman to win seven swimming medals at a single games.

McKeon is one of the leaders on a mighty Australian women's team that has accounted for six of the country's seven swimming golds.

“It's an amazing team," said Kaylee McKeown, who swept the women's backstroke events. “We’re not like the Americans who make a big deal of it, but we do definitely tap each other on the back and we’re all really proud of one another.”

As always, the Americans were assured of finishing atop the overall medal table, leading the Australians 26-18.

But they headed into the final day with half as many golds (eight) as they won at the 2016 Rio Games (16). Also, they were sure to miss their total from five years ago (33) — even with the addition of three new events at these games, two of which produced American golds.

While Dressel's performances were stellar, the Americans had some high-profile disappointments.

Katie Ledecky was beaten twice by Australia's Ariarne Titmus, the swimmer known as the Terminator becoming the first to beat the American star in an individual race at the Olympics.

Ledecky won a silver in the 400 free and took fifth place in the 200 free.

Simone Manuel, one of the biggest stars in Rio, qualified in only one individual event and didn't make the final.

More shocking, the U.S. failed to earn a medal in not one, but two relays. Before these games, the Americans had never entered a relay and missed out on the top three.

Dressel said those results were unacceptable for a country with more swimming depth than any other.

“The standard for the U.S. is gold,” Dressel said. “Next year at worlds, we’ll give that another go," he added, already looking ahead to the 2022 championships in the southern Japan city of Fukuoka.

But first, there’s one more day of swimming in Tokyo.