Report: Stages of Olympic relay to be pulled off Tokyo roads 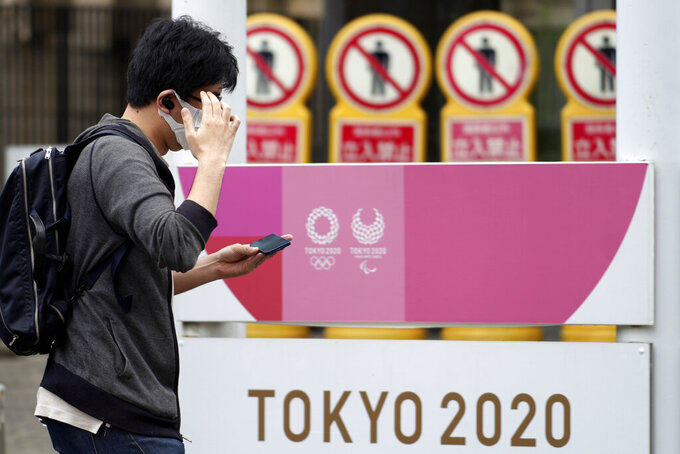 A man wearing a protective mask to help curb the spread of the coronavirus walks near an advertisement of Tokyo 2020 Olympic and Paralympic Games Tuesday, June 29, 2021, in Tokyo. (AP Photo/Eugene Hoshiko)

TOKYO (AP) — Some stages of the Tokyo Olympic torch relay will be pulled off the roads of the Japanese capital because of fears about spreading the coronavirus, Japan's Kyodo news agency reported on Tuesday.

Citing the Tokyo Metropolitan Government, Kyodo said the relay would not appear on public streets from July 9-16. Kyodo said organizers would decide on the format for the relay from July 17 until the opening ceremony on July 23.

The relay began in March in northeastern Japan. It has faced numerous detours, scaled back programs, and has been run at times only in public park spaces to avoid spreading the virus.

Tokyo is under a quasi-state of emergency until July 11 with infection cases rising again. Tokyo confirmed 476 new cases on Tuesday, up from 435 last Tuesday. It the 10th straight day that cases were higher than they were seven days previously.

Japan has attributed about 14,500 deaths to COVID-19, better than many countries but not as good as some Asian neighbors.

It's not clear what the alternative plans will be for the torch if it is removed from public streets in Tokyo.

Initial plans called for 10,000 runners to crisscross Japan for 121 days, winding up at the new National Stadium on July 23.

The relay is heavily sponsored by Coca-Cola and Toyota. Some suggested canceling the relay to save money after the Olympics were postponed 15 months ago, but any such plans were quickly scrapped.