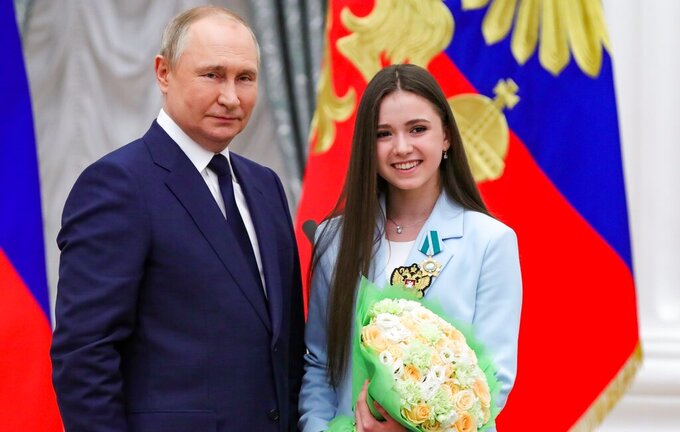 FILE - Russian President Vladimir Putin, left, poses for a photo with Kamila Valieva, a figure skater of the Russian Olympic Committee, in Moscow, Russia, Tuesday, April 26, 2022. The Russian Anti-Doping Agency will treat the Kamila Valieva doping case which shook figure skating at the Winter Olympics as confidential and won’t publish a verdict, it was announced Friday, Oct. 21, 2022 Valieva won Olympic gold in the team competition before finding out she tested positive for a banned substance before the Beijing Games. (Mikhail Klimentyev, Sputnik, Kremlin Pool Photo via AP, FILE)

MOSCOW (AP) — The Russian Anti-Doping Agency will treat the Kamila Valieva doping case which shook figure skating at the Winter Olympics as confidential and won't publish a verdict.

Valieva won Olympic gold in the team competition before finding out she tested positive for a banned substance before the Beijing Games. She appealed a provisional suspension and was allowed to skate in the women's individual event and placed fourth. The investigation has continued in Russia since then.

“In strict accordance with the principles of international and Russian anti-doping standards, and also taking into account the nature and circumstances of the case, RUSADA does not intend to announce the date of the hearing, the ruling or other details in the case,” the agency known as RUSADA said on Friday.

The statement did not use Valieva's name, instead referring only to a female figure skater of the ROC team, as Russia was known at the Beijing Olympics following an earlier dispute over doping.

RUSADA referred to the skater's status as a “protected person” under anti-doping rules. That status applied to Valieva, since she was under 16 at the time she gave the sample. World Anti-Doping Agency rules say public disclosure in cases involving a protected person is optional — publishing a verdict is mandatory for most cases in Olympic sports — and it “shall be proportionate to the facts and circumstances of the case.”

Friday's brief statement did not contain any mention of anyone other than Valieva. RUSADA said in February it started investigating Valieva's entourage, in line with international rules on doping cases involving a protected person. Valieva's coach is Eteri Tutberidze, who has coached a succession of world-beating Russian skaters.

It's unclear what the RUSADA announcement could mean for other skaters waiting on the verdict. No medal ceremony was held in Beijing for the team event because of the uncertainty around whether Valieva was eligible to compete. The U.S. won silver, Japan bronze, and Canada was fourth.

Since the Valieva case first became public, the International Skating Union has raised the minimum age for skaters at the Olympics to 17 in time for the next Winter Games in 2026.