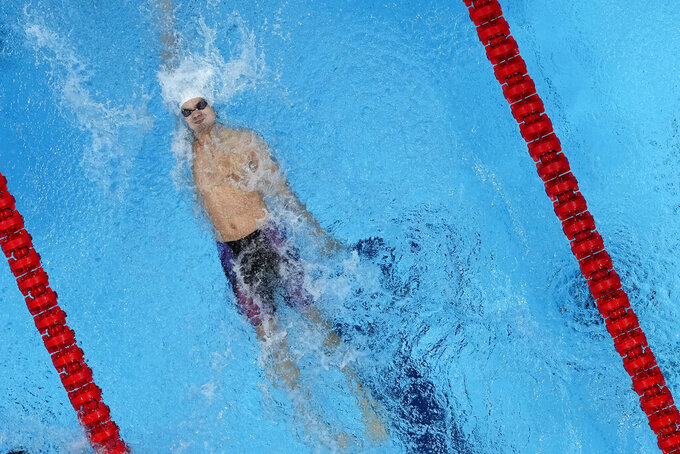 TOKYO (AP) — South Africa’s Tatjana Schoenmaker was the star of the day, setting the first individual swimming world record at the Tokyo Olympics.

Evgeny Rylov completed a backstroke double for Russia, Emma McKeon gave the Aussie women another gold, and China earned a return trip to the top of the medal podium.

The mighty Americans? For the first time in the meet, they spent the entire session Friday watching others win gold.

Schoenmaker, a 24-year-old South African, won the women’s 200-meter breaststroke with a time of 2 minutes, 18.95 seconds, breaking the mark of 2:19.11 set by Denmark’s Rikke Moller Pedersen at the 2013 world championships in Barcelona.

It was the third world record at the Tokyo Aquatics Centre, with the first two coming in women’s relays.

“I wasn’t expecting that at all," said Schoenmaker, who added to her silver in the 100 breast. ”It couldn’t have been a better race. It still just doesn’t sink in, maybe one day."

Rylov thoroughly snuffed out America's dominance in the backstroke, adding the 200 title to his victory in the 100 back.

Murphy was a double-gold medalist at the 2016 Rio Olympics, where he extended an American winning streak that began at the 1996 Atlanta Games.

The U.S. won 12 straight men's backstroke events over six Olympics, but that streak ended with Rylov's victory in the 100. He made it 2-for-2 in the longer race, while Murphy settled for bronze and silver in the two events.

McKeon touched first in the 100 freestyle with an Olympic-record time of 51.96, becoming only the second woman to break 52 seconds in the sprint.

Hong Kong’s Siobhan Haughey earned the silver in 52.27, while another Aussie, Cate Campbell, took the bronze in 52.52. American Abbey Weitzeil was last in the eight-woman field.

The Australians have won four individual women’s events at the Tokyo Aquatics Centre, in addition to setting a world record in a 4x100 free relay that included both McKeon and Campbell.

The team from Down Under has six golds overall, tied with the Americans, though the U.S. has the lead in the overall medal count.

The Americans won three medals Friday, also claiming the other two spots on the podium behind Schoenmaker.

But it was the first time the U.S. team went through an entire sessions of finals in Tokyo without winning at least one gold.

“I don’t come from behind, that’s for sure, so I just wanted to put it out there and see where it goes,” King said. “I thought I did great.”

A day after winning its first two golds at the pool, China picked up another victory when Wang Shun touched first in the men’s 200 individual medley.

It was another disappointment for hometown star Daiya Seto, who didn’t even qualify for the final of his first two events. He got through in the 200 IM, but just missed out on a medal with a fourth-place finish -- a mere five-hundredths of a second behind the Swiss bronze medalist.

American Michael Andrew led after the third leg, powering to the top spot on the breaststroke. But he faded badly on the freestyle to wind up in fifth, more than 2 seconds behind the winner.

“I think it hurt worse than it looked, and it looked pretty bad,” Andrew said. “I knew I had to be fast at the 150 and I was praying for some Holy Spirit power to get me home in that (final) 50, but it wasn’t all there.”

But the U.S. has several good chances to claim gold over the last two days of the swimming competition.

Caeleb Dressel has two individual finals remaining, and Katie Ledecky is a big favorite in the 800 free.

Dressel set another Olympic record in the semifinals of the 100 butterfly.

Minutes after Hungary’s Kristof Milak took down the mark in the first semifinal heat, Dressel went even faster with a time of 49.71 in the second heat.

“I feel fine,” Dressel said. “I’m not worried about the schedule. I’ve had it written down for a couple weeks now. I know what’s coming. I know how to pace it correctly. I know how to take care of my body.”

It was the third-fastest time in history and left Milak as the second-fastest qualifier at 50.31.

In the preliminaries, Dressel tied the former Olympic record of 50.39 set by Singapore’s Joseph Schooling to win gold at the 2016 Rio Games.

Dressel will be a big favorite in Saturday morning’s final, though he could get pushed by Milak. The Hungarian already won the 200 fly with a dominating victory.

Dressel picked up the first individual gold medal of his career with a win in the 100 freestyle.