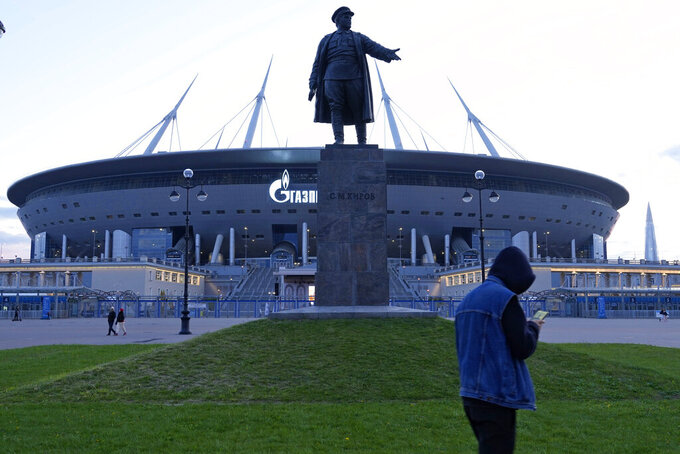 A man walks past the Gazprom Arena, the stadium that was supposed to host the Champions League 2022 final soccer match in St. Petersburg, Russia, Saturday, May 28, 2022, with a sculpture of one of Bolshevik's leader Sergei Kirov in the foreground. UEFA removed Saint Petersburg as the host of the final due to the ongoing Russian-Ukrainian crisis. (AP Photo/Dmitry Lovetsky)

GENEVA (AP) — Russian appeals against bans from international soccer because of the country’s war in Ukraine are set to be heard at the Court of Arbitration for Sport in July.

The court on July 5 will hear the Russian soccer federation's appeal against FIFA and UEFA's joint decision to suspend its national and club teams days after Russia invaded Ukraine in February.

A second CAS hearing on July 11 will consider an appeal by four Russian clubs, including national champion Zenit St. Petersburg, against exclusion from the next UEFA club competitions.

UEFA’s executive committee made that separate ruling on May 2 among decisions affecting more than 15 European competitions. The Russian women’s team was also removed from the European Championship that kicks off next month in England.

Lawyers and officials involved in the cases confirmed the CAS hearing dates which have yet to be listed formally by the court.

Urgent verdicts could be requested by the clubs ahead of scheduled games in qualifying rounds of the Champions League and other UEFA competitions.

The high-profile soccer cases could set the tone for similar appeal cases pending at CAS between Russia and governing bodies of Olympic sports.

The IOC has said suspending Russian athletes and teams is intended not to punish them but to protect the safety and integrity of events at a time of “deep anti-Russian” feelings.

UEFA and FIFA in imposing their bans said on Feb. 28 that “football is fully united here and in full solidarity with all the people affected in Ukraine.”

Russian soccer officials tried to freeze the FIFA ban ahead of a World Cup qualifying playoff on March 24, but that was rejected by a CAS judge. Russia’s scheduled opponent Poland had refused to play the game citing the invasion of Ukraine.

FIFA lawyers supported Poland’s move and later cited the risk of “irreparable and chaotic” consequences for the World Cup in Qatar if Russia was cleared to play and then advanced to the final tournament in November.

“Having considered all these factors, FIFA must act to guarantee the efficient organization and smooth running of its competitions,” soccer’s governing body argued to the court in March.

Lawyers for the Russian soccer federation argued the ban was “a disguised disciplinary sanction” where the right to be heard at the FIFA Council was denied.

Poland did eventually qualify for the World Cup and on April 1 was drawn in a group with Argentina, Mexico and Saudi Arabia.

Even if the Russian soccer federation wins its appeal at CAS, it seems unlikely the men’s and women’s teams could be reinstated in the World Cup or Women’s Euro 2022.

Victory for the Russian clubs in their July 11 appeal should lead to reinstatement in the 2022-23 UEFA club competitions which is worth tens of millions of euros (dollars) in prize money.

Zenit would have had direct entry to the Champions League group stage starting in September.

League runner-up Sochi would be due on July 18 to play in the Champions League third qualifying round draw. First-leg games are scheduled Aug. 2-3.

The three judges in the clubs' hearing include American lawyer Jeffrey Benz. At the Beijing Olympics, Benz was part of the CAS panel that cleared Russian figure skater Kamila Valieva to compete despite an ongoing investigation of a doping case.