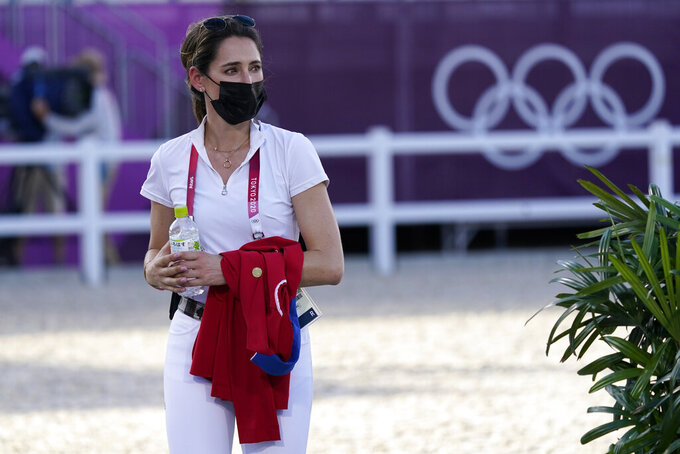 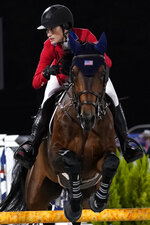 Perhaps she'll do better with a band.

The 29-year-old's Olympic debut was off to a strong start on the 14-jump course before her horse got uneasy around the 11th obstacle, and the pair earned four penalty points for knocking down a rail. That put her on the bubble of the 73-horse field for one of 30 spots in the final. She was formally eliminated about an hour after riding.

“All in all, I'm thrilled with the round and I'm excited for the rest of the week," she said.

Springsteen learned to ride on her family's horse farm in Colts Neck, New Jersey, and she was an alternate for the London Games in 2012 but didn't participate.

She's been riding 12-year-old Don Juan van de Donkehove — he answers just fine to Don — for about two years. The duo arrived in Tokyo ranked 14th in the world.

They whirled around a jumping course with a distinctly Japanese feel — obstacles were adorned with life-sized sumo wrestlers, geisha kimonos, cherry blossoms and even a miniature recreation of a Japanese palace.

In a sport without any household names, Springsteen has generated some rare buzz from Tokyo. Nearly all the mainstream press coverage for equestrian in the U.S. during these Games has focused on Springsteen. On the ground here, about a half dozen members of the Bruce Springsteen Japan Facebook group gathered outside the locked stadium last week to offer support.

The rider herself has been buffered tightly from the attention. U.S. Equestrian denied requests for 1-on-1 interviews with her, and questions at a news conference Monday were screened by the public relations staff to block any mention of her famous family.

Reporters in the mixed zone Tuesday were warned not to ask about her family. When a journalist began to ask about Springsteen's experiences riding as a child, a U.S. Equestrian staffer grabbed her and ushered her away.

The Boss’s daughter is hardly the first famous offspring to trot an Olympic track — no surprise given the sport’s significant financial barriers.

Princess Anne represented Britain in the eventing competition at the 1976 Montreal Games. Her daughter, Zara Tindall, jumped at London in 2012. Georgina Bloomberg, daughter of former New York City mayor Michael Bloomberg, has also jumped for Team USA but never at the Olympics.

This year’s field included another billionaire relative — Egypt’s Nayer Nassar is the son-in-law of Bill Gates. Nassar ran a clean qualifier to earn a spot in Wednesday's finals.

“I support many athletes in the Tokyo Olympics at the moment,” Gates wrote on Instagram. “But there is no athlete I support more than my son-in-law Nayel Nassar. Good luck Nayel.”

Britain's Ben Maher had the fastest time among qualifiers who did not commit any penalties, a sharp showing as he begins his effort to follow countryman Nick Skelton as a gold medalist. Skelton retired after winning the 2016 championship.