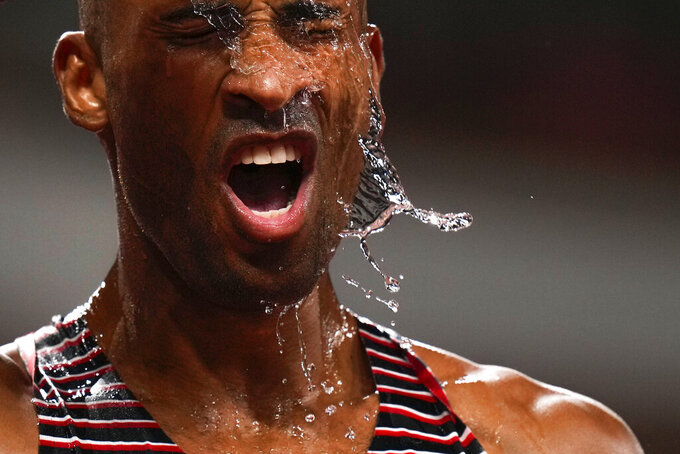 Damian Warner, of Canada douses himself in water as he celebrates after winning the gold medal in the decathlon at the 2020 Summer Olympics, Thursday, Aug. 5, 2021, in Tokyo, Japan. (AP Photo/Francisco Seco) 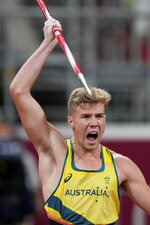 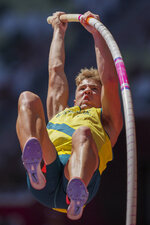 TOKYO (AP) — Even for the athletes good enough and brave enough to take on the decathlon or the heptathlon at the Olympics, Tokyo was next-level hard.

By the end of the two days, which covered 10 events for the men and seven for the women, all in hot, steamy conditions, Damian Warner of Canada had won his first Olympic title and Nafissatou Thiam of Belgium had defended hers.

Was it worth it?

“I was just looking forward to being done with it," Thiam said.

That she finished was great. Winning gold even better. Even more impressive considering those who didn't make it to the final tests — the 1,500-meter run for the men, and 800 for the women.

World champion and gold medal contender Katarina Johnson-Thompson of Britain left on the first day with a torn right calf muscle. She waved off a wheelchair and decided that, at the very least, she would finish her 200-meter race before withdrawing. She did, but at a limp, not a sprint and was disqualified from the race for stepping out of her lane.

The decathlon world champion, Niklas Kaul, wasn't able to do that. He exited on a wheelchair after breaking down halfway through a 400-meter race at the end of the opening day when his injured right foot gave in.

It continued Thursday. World record holder Kevin Mayer hung on for the silver medal despite a back injury, finishing just 77 points ahead of 21-year-old Australian Ash Moloney. He decided, all things considered, he couldn't be disappointed with second.

“It’s pretty good to have a medal in that condition,” he said, hand on his back and wincing.

“It’s one of those moments when all the dreams you had as a kid finally came through and I don’t know how to react to it,” the 31-year-old Warner said.

And then, in a far grittier assessment, the Olympic decathlon champion — the best all-around athlete in the world for some — explained how it really felt to have to race that final four laps having already run and jumped and thrown to his body's limit through nine previous events.

Not even this time, when it delivered an Olympic gold to top his bronze from Rio in 2016 and three world championship podium finishes.

This year's multi-eventers had more than just the typical punishing physical demands to deal with; those come with the job.

Thiam also lost her coach for the crucial final day after he tested positive for COVID-19 and went into quarantine.

“That wasn't easy," she said. “That was a hard moment when they told me he wouldn’t be there. It took me a moment to get my mind together and just be fully focused again.”

She refocused well enough to retain her title and there were smiles on the track at the end. But her voice broke and she held back tears when she spoke later, taken to the limit physically but also emotionally.

The last 18 months brought the pandemic, while Tokyo brought another new challenge, as if the multi-eventers needed it. The scorching heat and humidity at the Olympic Stadium had many of the competitors donning ice vests and dumping ice inside and over their hats to try stay cool.

“The heat was spanking, it was spanking today,” said Maicel Uibo of Estonia, the silver medalist at worlds in 2019, who finished 15th this time. But he finished.

It all begged the question: Why even take up the decathlon or heptathlon? Some posed that to Warner: Do you regret choosing to be a decathlete?

“All the time," he said. “We’ve had the unfortunate luck of being good at something like the decathlon.

“As you get near the end, you think, why do I do this? And then you finish, and you’re like, I can’t wait to do the next one. It’s a weird thing.”