Triathlete rides out the pandemic on her way to Tokyo Games 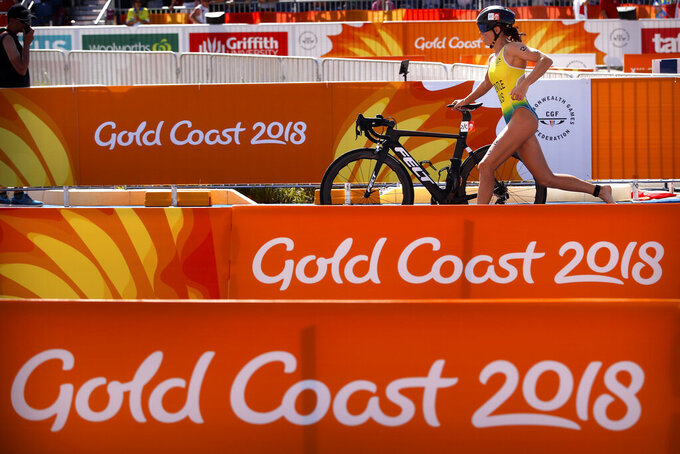 FILE - In this April 7, 2018 file photo, Ashleigh Gentle of Australia competes during the mixed team relay triathlon at the Southport Broadwater Parklands during the 2018 Commonwealth Games on the Gold Coast, Australia. Gentle, is looking forward to possibly representing her country again when the mixed team format makes its Olympic debut in Tokyo. That'll be in addition to her place in the women's individual race. (AP Photo/Mark Schiefelbein, File)

BRISBANE, Australia (AP) — Australian triathlete Ashleigh Gentle had just finished a training session at her temporary base of Cairns in north Queensland state. Hot, muggy and tropical Cairns — except for the tropical part — is exactly what she’s expecting during her competition at the Tokyo Olympics.

“It’s one of the hottest, most humid places, and it’ll help simulate conditions for Tokyo,” Gentle said of Cairns in a phone interview with The Associated Press. “It’s nice to get back to the warmth and remind my body what it’s like.”

The warmth reference is all relative for a Queenslander used to moderate temperatures even in the southern hemisphere winter. Gentle lives in Brisbane, about 1,600 kilometers (1,000 miles) south of Cairns, but still in a subtropical climate. A cold snap around Brisbane in southeast Queensland state meant temperatures had dropped to as low as 5 degrees Celsius (41 Fahrenheit) on several nights just before she left for Cairns.

The Commonwealth Games gold medalist in Australia’s mixed team triathlon in 2018 and a 2017 world champion for Australia in the same event is looking forward to possibly representing her country again when the mixed team format makes its Olympic debut in Tokyo. That’ll be in addition to her place in the women’s individual race.

The Olympic triathlons will have early starts to help counteract the expected humid, hot summer conditions in Tokyo: the men’s race on July 26 and the women’s on July 27 will begin at 6:30 a.m. local time. The mixed race on July 31 starts an hour later.

“We’re pretty lucky, we most often have relaxed starts, often 10 a.m. and in some places in Europe, maybe not till 4 or 5 p.m.,” the 30-year-old Gentle said. “It will be pretty different to get up that early in the dark to go race.”

Australia is the only country which will be represented by the full complement of six racers in Tokyo. Gentle, who finished 26th at the Rio Olympics in 2016 but won the World Triathlon Grand Final on the Gold Coast in 2018, reckons that will be a huge advantage for Australia in the mixed event.

Australia has never finished off the podium in mixed relay world championship events since 2015, taking a gold medal, three silver and a bronze.

“If you have (a choice of) three of each, we can make changes right up to two hours before the race,” Gentle said of the mixed event which features two male and two female athletes competing in relay fashion. “With the amount of rules and regulations and COVID concerns in the athletes’ village, that could make a big difference."

Gentle didn’t always do well trying to cope with the after-effects of the coronavirus-forced postponement last year of the Tokyo Games.

She was competing at a World Cup event in Mooloolaba on the Sunshine Coast, north of Brisbane, in late March 2020. It turned out to be the last event she’d race in a while — the lockdown in Australia and most of the rest of the world started within days.

“I was kind of expecting it, it was getting so close, and things were getting bad,” she said. “But I was still devastated and didn’t know what to think. I felt deflated and had to tune it all out."

She decided to take a break from training and instead worked on renovating the Brisbane house she and her partner, ultramarathoner Josh Amberger, built in 2018.

“There were so many things we wanted to do, and we had all the materials, so we decided to do that,” Gentle said, adding with a chuckle, “I basically turned into a landscaper.”

When she returned to training a month or so later, she found the swimming pools she trained at were still closed, as were gyms for weight training. The Olympic-distance triathlon is a 1.5-kilometer swim, 40-kilometer cycle and 10-kilometer run, forcing triathletes into a variety of training regimens.

But instead of relying on a quantity of training, she went for quality.

“I worked more on technique, skill-based training instead of doing massive hours,” Gentle said. "Ï was trying to do all those little things right, when you are not under the pump.”

Gentle, who returned to mostly full training in November, has had two doses of the Pfizer COVID-19 vaccine, as have nearly all of Australian Olympic athletes heading to Tokyo.

“I knew that my long-term goal was still a long way away,” Gentle said of her pandemic-forced mindset. “But once I got back into it, I thought, ‘we are training for the Olympics now . . . it's probably going to happen.’ It was good that what I had done last year was the best preparation."