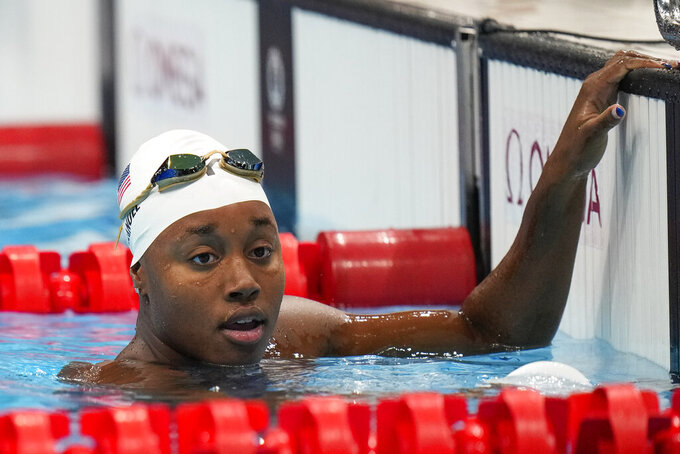 TOKYO (AP) — A most trying Olympic year for Simone Manuel came to a disappointing end.

The American sprinter failed to advance to the 50-meter freestyle final in Tokyo. She finished tied for 11th in the semifinals on Saturday. The top eight made Sunday’s final.

“It’s hard to work so hard for something and not see the results pay off,” she said. “The swim I had was my best today, but it’s not representative of my potential.”

The chaotic single-lap race was Manuel's only individual event in Tokyo, where she was a co-captain of the U.S. women's team. She didn't qualify at the Olympic trials in the 100 free and wasn't able to defend her historic title won five years ago at the Rio de Janeiro Games.

Manuel became the first Black woman to win an individual gold in swimming in 2016. She also claimed silver in the 50 free, one of her four medals from Rio.

She revealed at the trials that she had been diagnosed with burnout earlier this year, forcing her to stop training for a time after the coronavirus pandemic had already disrupted her Olympic preparations. She rallied at trials to qualify for the 50 free.

“I’m really proud of myself,” she said, with teammates Natalie Hinds, Lilly King and Allison Schmitt standing behind her. “I finished what I started.”

Tears welled in Manuel's eyes and her voice choked with emotion behind her mask.

“It maybe didn’t end the way I wanted it to, but I have so much to be proud of,” she said. “I have so many people that love me, whether I accomplish something or I don’t. I’m really grateful to be here.”

With the Paris Games just three years away, the 24-year-old from Texas plans to keep swimming.

“My body and my mind needs a break but I still love this sport,” she said.

Outside of the pool, Manuel has focused on trying to help the predominantly white sport become more racially inclusive. She's been outspoken about social justice and teamed with a corporate partner to distribute laptops in Oakland, California.

Her biggest accomplishment may have simply been making the U.S. team.

“A victory is not giving up. I had the courage to go out there and try and possibly fail,” she said. “I’ve learned so much about myself. What I do know is that I’m a fighter.”