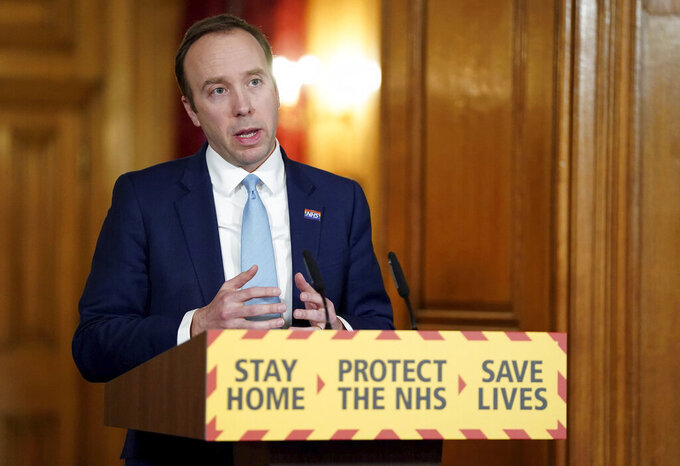 In this handout photo provided 10 Downing Street, Health Secretary Matt Hancock speaks during a media briefing on coronavirus in Downing Street, London, Thursday, April 2, 2020. The new coronavirus causes mild or moderate symptoms for most people, but for some, especially older adults and people with existing health problems, it can cause more severe illness or death. (Pippa Fowles/10 Downing Street via AP)

LONDON (AP) — The British government promised Thursday to increase testing for the new coronavirus to 10 times the current level within the month, after political opponents, scientists and even usually supportive newspapers lambasted Prime Minister Boris Johnson over broken promises on COVID-19.

Health Secretary Matt Hancock, who has just spent a week in quarantine after being diagnosed with the virus, told a news conference that 100,000 tests a day would be performed by the end of April.

He said the government was enlisting the public health service, academia and the private sector to scale up a testing capacity that has been widely called inadequate.

“I am now setting the goal of 100,000 tests per day by the end of this month,” Hancock said. “That is the goal and I am determined that we will get there."

Johnson’s Conservative government vowed weeks ago to rapidly increase the number of tests for the new coronavirus to 10,000 a day, then 25,000 a day by mid-April. But progress has been slow. The government says 10,412 tests were performed Tuesday, the first time the daily target was met.

Like some other countries, the U.K. has limited virus testing to hospitalized patients, leaving people with milder symptoms unsure whether they were infected. Many scientists say wider testing — especially of health care workers — would allow medics who are off work with symptoms to return if their results are negative, and would give a better picture of how the virus spreads.

Johnson tested positive for the virus a week ago and revealed last Friday that he had mild symptoms of COVID-19 disease. He has continued working while in self-isolation and promised in a video message that the government was “massively increasing testing.”

Opinion polls suggest Britons have been largely supportive of the government’s efforts to contain the new coronavirus. Johnson ordered residents to stay home except for a handful of permitted circumstances and ordered the closure of schools, bars, restaurants and non-essential shops.

But as the number of virus-related deaths in the U.K. accelerated in recent days, the unity behind the government’s response is shattering. Government figures showed Thursday that the country had 33,718 confirmed cases and 2,921 deaths — an increase of 569 deaths from the day before.

The right-leaning Daily Mail newspaper slammed the “testing fiasco” on its front page Thursday. “Questions without Answers,” said the Conservative-supporting Daily Telegraph, accusing the government of being unable to say why Britain lagged behind its European neighbors on testing.

Critics compare Britain's approach to testing unfavorably to the one in Germany, which has the ability to test 500,000 people a week and has reported fewer deaths among people with the virus,

The government says testing front-line health care workers is a priority, and it set up five drive-through test centers to do it. But they had tested only 5,000 people by Thursday, from a National Health Service workforce of more than 1 million.

Hancock, the health secretary, said Thursday that any health worker who needed a test would get one.

Paul Cosford, emeritus medical director of Public Health England, acknowledged that “everybody involved is frustrated that we haven’t got to the place where we’ve got to get to.”

For most people, the coronavirus causes mild or moderate symptoms, such as fever and cough. But for others, especially older adults and people with health problems, it can cause severe conditions like pneumonia and is sometimes fatal.

Part of the problem is Britain’s centralized state-funded health system, which is fairly efficient at organizing hospital treatment but poor at rapidly boosting testing capacity. All coronavirus tests were initially processed at a single Public Health England laboratory, though several other public labs are now also handling the tests.

British officials also blame shortages of swabs to take samples and of chemicals known as reagents, which are needed to perform the tests, for the delay in ramping up testing.

But private-sector firms and academic institutes say their offers of help have so far been ignored.

Paul Nurse, chief executive of the Francis Crick Institute for biomedical research, said its laboratory had been re-purposed so it could carry out 500 tests a day by next week, rising to 2,000 a day in future.

He compared the effort required to the evacuation of hundreds of thousands of British troops from the French port of Dunkirk as it was overrun by German forces in 1940 — a rescue that saw hundreds of small private boats join the navy in plucking soldiers from the beaches.

"We are a lot of little boats. and the little boats can be effective,” Nurse said. "The government has put some big boats, destroyers in place. That's a bit more cumbersome to get working and we wish them all the luck to do that, but we little boats can contribute as well." ___