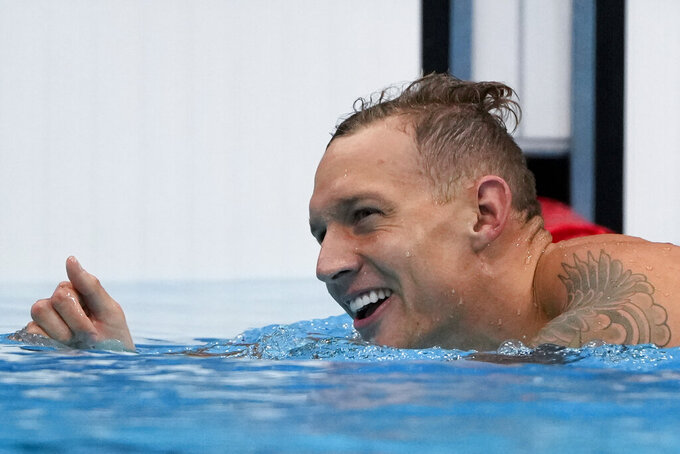 TOKYO (AP) — After an Olympics with plenty of free time, Simone Manuel finally got back to racing Friday night.

Manuel competed for the first time since anchoring the United States to a relay bronze medal, shaking off a five-day layoff to post the 11th-fastest time in the preliminaries of the 50-meter freestyle at 24.65 seconds.

The frenzied dash from one end of the pool to the other is the American swimmer's only individual event in Tokyo. She was among 16 swimmers advancing to Saturday's semifinals.

“It kind of felt like another first swim,” Manuel said. “First swims are always a little rocky. I'll kind of reset and get ready for tomorrow morning.”

After being diagnosed with overtraining syndrome, Manuel shockingly failed to qualify for the 100 freestyle — the event she won at the 2016 Rio Games to become the first Black American to capture an individual gold in swimming.

Manuel was the silver medalist in the 50 five years ago, but she'll have to overcome some tough competition to get back to the medal podium.

Australia's Emma McKeon, who won the 100 free during the morning session, set an Olympic record in the 50 heats at 24.02, eclipsing the mark set at the 2012 London Games by Ranomi Kromowidjojo of the Netherlands.

The defending 50 champion, Denmark's Pernille Blume, was second fastest at 24.12, followed by Australia's Cate Campbell in 24.15.

“I think I always have a chance,” Manuel said. “If I'm diving in the water and I'm on the heat sheets, I still have opportunity to win the race. So I think it’s important that I continue to believe in myself.”

Manuel had not competed since Sunday, when the Americans earned bronze in the 4x100 free relay with her taking the final leg.

“It's been a while that I haven't had such a jam-packed schedule,” she said. “But I'm just trying to rest as much as possible, continue to cheer on Team USA, but still focus on the races that I have, especially since they're at the end of the meet.”

Caeleb Dressel has been busier of late.

After setting an Olympic record in the semifinals of the 100 butterfly during the morning session, he returned to the pool to post the top time in the preliminaries of the 50 free.

The American star touched in 21.32 to lead the field heading into Saturday’s semifinals.

He was followed by France’s Florent Manaudou, the silver medalist at the 2016 Rio Games. Defending Olympic champion Anthony Ervin failed to qualify for the U.S. team.

Ukraine’s Mykhailo Romanchuk posted the top time in the heats of the men’s 1,500 freestyle at 14 minutes, 45.99 seconds.

American Bobby Finke, the surprise winner of the 800 free, was next at 14:47.20, while defending Olympic champion Gregorio Paltrinieri of Italy also advanced to the final with the fourth-fastest time, 14:49.17.

In the 4x100 medley relay heats, Canada was the top qualifier, followed by the U.S. and Australia. On the men's side, Italy led the way while the Americans barely slipped through to the final with only the seventh-fastest time.

The American men have never lost a medley relay they’ve entered at the Olympics. The U.S. women are two-time defending champions in the event.

The finals for the 50 frees, medley relays and men's 1,500 free will be held Sunday, the final day of swimming competition at the Tokyo Aquatics Centre.