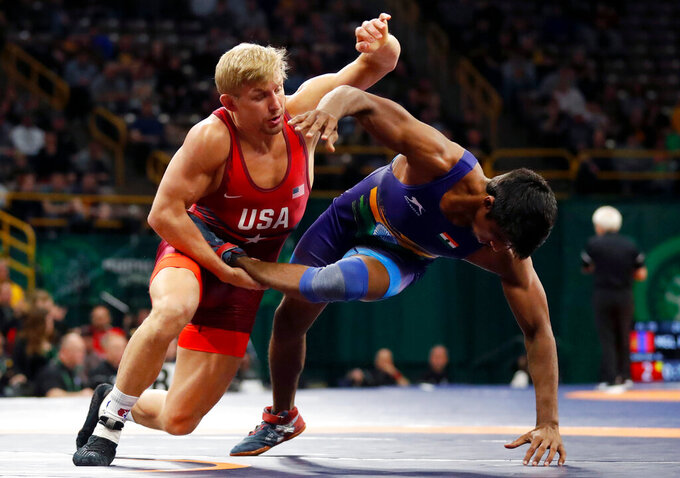 FILE - In this April 7, 2018, file photo, United State's Kyle Dake, left, takes India's Sachin Giri to the mat during their 79 kg match in the Freestyle Wrestling World Cup in Iowa City, Iowa. Dake finally broke through at age 30 at the U.S. Olympic Trials and qualified for Tokyo at 74 kilograms. (AP Photo/Charlie Neibergall, File)

Five years ago, Kyle Dake was injured and ready to retire.

Though he had been one of America’s most successful freestyle wrestlers, he had come up short of his most lofty goals many times. Injuries to his labrum, bicep, hand, shoulder and foot played a significant role in his struggles.

He also was trying to get past Jordan Burroughs — widely considered one of the best freestyle wrestlers of all time. Burroughs won an Olympic gold medal in 2012 and has claimed four world titles at 74 kilograms.

In 2017, Dake shifted his approach to rehabilitation and working out with help from a company called Functional Patterns. After changes in fitness training helped him recover from his injuries, he finally got the result he had sought for so long. He beat Burroughs at this year’s U.S. Olympic trials to qualify for the Games for the first time.

At age 30, Dake feels his time finally has come.

Dake said beating Burroughs gives him confidence heading into Tokyo, but he knows that doesn't guarantee anything.

Dake became a world champion twice at the non-Olympic weight of 79 kg before dropping down to 74 to defeat Burroughs. To earn gold in Tokyo, Dake likely would cross paths with Italy’s Frank Chamizo and/or Russia’s Zaurbek Sidakov. Chamizo was a bronze medalist at 74 kg in Rio in 2016 and is the No. 1 seed in Tokyo. Sidakov won the world title at 74 kg in 2019.

“I feel like I’m just a better wrestler than all these guys,” Dake said. “I feel like I’m more fluid in different positions and understand different aspects. In my opinion, the only way I really lose is if I decide not to wrestle and I just stand in front of a guy.”

Dake’s swagger comes from a long run of success. At Cornell, he was a four-time NCAA champion, each coming at a different weight class. He placed third at the Olympic trials in 2012 and second in 2016 before winning his two world titles.

Dake's confidence started to climb when he beat Chamizo last July. Dake believes his approach would give him an edge.

“His execution and plan leading up to an event is much different than mine,” Dake said. “I think that his is a little bit more laissez faire. Mine is more regimented, like making sure that I hit all these all these milestones before I get to a competition.”

Dake has never faced Sidakov. He has great respect for him and would welcome the matchup.

“I think I’m a really, really tough matchup for him,” Dake said. “He depends on being strong and hand-fight and push guys, but having some pretty good size of my own and strength of my own, I feel I can hold my own in those positions.”

Dake said his mental approach is the only thing that can stop him in Tokyo.

“My sole focus to go out dominate and really just force the action, not by getting extended, not by taking bad shots or taking unneeded risk, but not allowing them to just stand and play pattycake,” he said. “And I want to go out and put them in a position where they feel threatened. I need to go wrestle.”