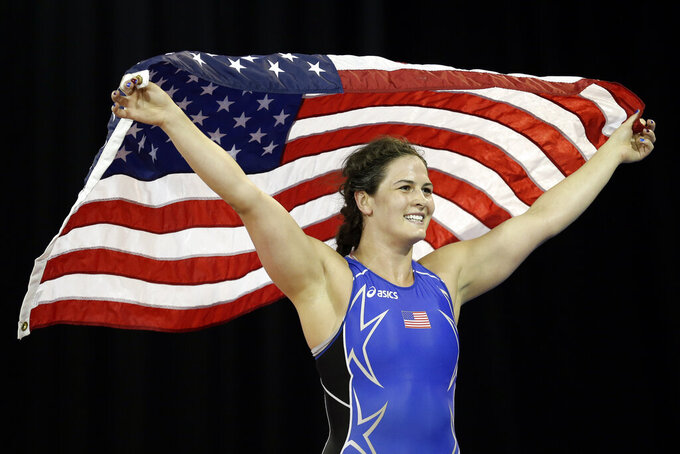 FILE - In this July 17, 2015, file photo, United States' Adeline Gray celebrates her gold medal win, defeating Canada's Justina Distasio during the women's freestyle 75 kg final in wrestling competition in the Pan Am Games in Mississauga, Ontario. Gray has done everything except win an Olympic gold medal during her outstanding career. The five-time world champion is one of the most dominant competitors ever in women’s freestyle wrestling. But misfortune struck at the 2016 Games when she lost to Vasilisa Marzaliuk of Belarus in the quarterfinals. (AP Photo/Gregory Bull, File)

CHIBA, Japan (AP) — American wrestler Adeline Gray has done everything except win an Olympic gold medal during her outstanding career.

The five-time world champion is one of the most dominant competitors ever in women’s freestyle wrestling. But misfortune struck at the 2016 Games when she lost to Vasilisa Marzaliuk of Belarus in the quarterfinals. She finished a disappointing seventh in the 75-kilogram class while fighting through neck, shoulder and back injuries that required surgery and kept her out of action for a year.

Since healing up, she has won two more world titles. Now, she’s focused on finally getting an Olympic gold. She heads into the Tokyo Games as the No. 1 seed at 76kg. Action in her class will take place on Sunday and Monday.

At 30, she knows time is ticking as she tries to add the crowning achievement to her career.

“I definitely think legacy is important,” she said. “I’m vying for a very important piece of history right now. I could be the first (American) heavyweight for women’s wrestling to win the gold medal. And so being the first in anything is awesome.”

She tries to put the loss in 2016 behind her, yet she recalls it like it just happened, even thinking specifically about a move she feels could have scored on if healthy.

“I don’t want to blame it solely on the injuries because it really does just kind of feel like a loss, and losses are part of wrestling,” Gray said. “But I also know that there were some contributing factors physically and mentally that were very wearing leading up to the 2016 Olympic Games.”

She’s got her confidence and her health back now.

“I was a great wrestler back in 2016, and I’m a great wrestler now, and I don’t really think that loss means that much,” she said. “It’s disappointing. I was disappointed that the timing of that loss happened at the 2016 Olympic Games. But at the same time, that is part of sport, is having some of those losses and moving forward.”

Only one U.S. women’s wrestler has won gold. Helen Maroulis stunned Saori Yoshida — a three-time Olympic gold medalist from Japan — in the 53kg final in 2016. To join Maroulis as a gold medalist, Gray must top an extremely deep field.

Erica Wiebe, the 2016 Olympic gold medalist from Canada, is back. Natalia Vorobeva of Russia won gold in 2012 at 72kg and was a silver medalist in 2016 at 69kg. Aline Rotter-Focken of Germany is a former world champion who has been one of the world’s best since jumping up to 76kg in 2018. Yasemin Adar of Turkey won the world title in 2017 while Gray was out recovering. Hiroe Minagawa of Japan is in the mix as a No. 3 seed. The No. 4 seed is Elmira Syzdykova of Kazakhstan. And Marzaliuk, who beat Gray in 2016, is back.

“We’ve had a group of about seven of us that all kind of beat each other,” Gray said. “And it’s just a group of really tough people.”

Gray knows Rotter-Focken well and wouldn’t mind having a match with her.

“We have actually been competing against each other since we were teenagers,” Gray said. “And so I actually invited her to my wedding. So she’s my friend and it would be really cool. We spent a lot of time training together and she has done some great things in Germany.”

Gray wishes the action could be in front of a full crowd of Japanese fans, but spectators won’t be allowed because of COVID-19 restrictions. She said Japan’s love for wrestling would have been special for the world to witness.

Unlike most competitors, Gray will have family present. Her sister, Geneva, is in Tokyo to help her prepare. Gray hopes that gives her an edge.

“My sister will be there with me to warm up and be there, just like she’s been for the last year through Olympic trials and through all of our major events,” she said. “And she’ll get to be there, win, lose or draw. And I'm just so happy and I feel so blessed that I get to have her experience this with me.”